From his school days as an architecture student stepping on campus for the first time in 1972 to an appointment as Louisiana Tech’s 14th President in 2013, Dr. Leslie K. Guice has shown an unwavering commitment to leadership and service to his alma mater. 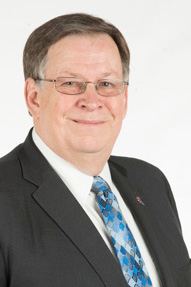 One of Guice’s first achievements at Louisiana Tech was earning a Bachelor of Arts in architecture in 1976. Discovering a passion for engineering under the mentorship of Professor Jack Painter, Guice went on to earn a master’s degree in civil engineering from Tech in 1978. While working on his master’s degree at Louisiana Tech, he also discovered a passion for teaching and education as a profession.

Throughout the next decade, Guice would continue to distinguish himself as an academician, researcher, administrator, and leader. His dedication to his students, his faculty, and the University would lead to his appointment as Dean of Louisiana Tech’s College of Engineering and Science (COES) in 1999. As Dean, Guice continued to encourage and support innovations in the curricula. The College’s faculty became increasingly successful in securing external funding for the integrated curriculum which resulted in a transformative redesign of curricula throughout the College.

Guice’s leadership and vision also reinvigorated the Engineering and Science Foundation to more effectively serve the needs of the College. He initiated a new integrated strategic plan, known as “COES 2010,” and capital campaign, “Tech’s BEST,” which led to major advancement of the college and to funding for an Eminent Scholar Chair, 15 Professorships, $500,000 Scholarship Fund, and several new laboratories and facilities.

His leadership also helped to guide the Institute for Micromanufacturing (IfM) toward a focus on the emerging field of nanotechnology. With the hiring of key nanotechnology faculty in numerous disciplines, further expansion of research laboratories, establishment of an interdisciplinary engineering Ph.D. program with a nanotechnology track, and initiation of a Bachelor of Science degree in nanosystems engineering, the IfM and COES established strong research and education nanotechnology programs that have received national recognition.

In 2004, Guice’s performance and accomplishments as dean led to his appointment as Tech’s vice president for research and development. During his tenure as vice president and, beginning in 2012, as executive vice president, Tech has significantly increased patents, licenses/options, start-up companies, SBIR grants with affiliated companies, and has established strong industry partnerships for commercialization of technologies. Guice also led the establishment of Tech’s first two technology incubators, the Rawle and Humana Enterprise Centers.

With a focus on the future and a progressive vision for economic development, Guice has led the planning and development of the Louisiana Tech Enterprise Campus – a research park connecting the university and downtown Ruston. Enterprise Campus’ first building, Tech Pointe, was completed in 2012 and is now home for several companies and organizations, including an Air Force-funded Cyberspace Research Laboratory. With the completion of Tech’s new College of Business building and renovation to University Hall as a home for interdisciplinary entrepreneurship and innovation activities, the first phase of Enterprise Campus was completed.

Guice’s reputation for exemplary leadership and service is further evidenced by the many statewide and conference-wide organizations he has founded or chaired, and he’s been honored with numerous awards, both locally and statewide.

As president, Guice is the chief executive officer of north Louisiana’s only Carnegie Foundation national research university and one of only two public universities from Louisiana recognized in the top tier of national universities in the U.S. News and World Report. Guice leads a University that consistently receives high marks in affordability, in starting salaries for graduates, and in providing graduates with the best returns on their investments.

Throughout his career, Guice has contributed to and played a central role in creating the culture and vision for the future of Louisiana Tech; he continues that commitment as president. Guice’s focus on campuswide engagement, building and growing relationships, and leadership in forging a path toward advancement of the University’s academic and athletic programs, research and commercialization activities, and economic development efforts means that Louisiana Tech University’s best days are yet to come.

Guice is a native of Bastrop. He and his wife, Kathy, have three sons – Kyle, Chad, and Bret – and three grandchildren, Christopher and twins Everly and Elizabeth.