Home › Reflection › Lighting of the Lady of the Mist

Lighting of the Lady of the Mist 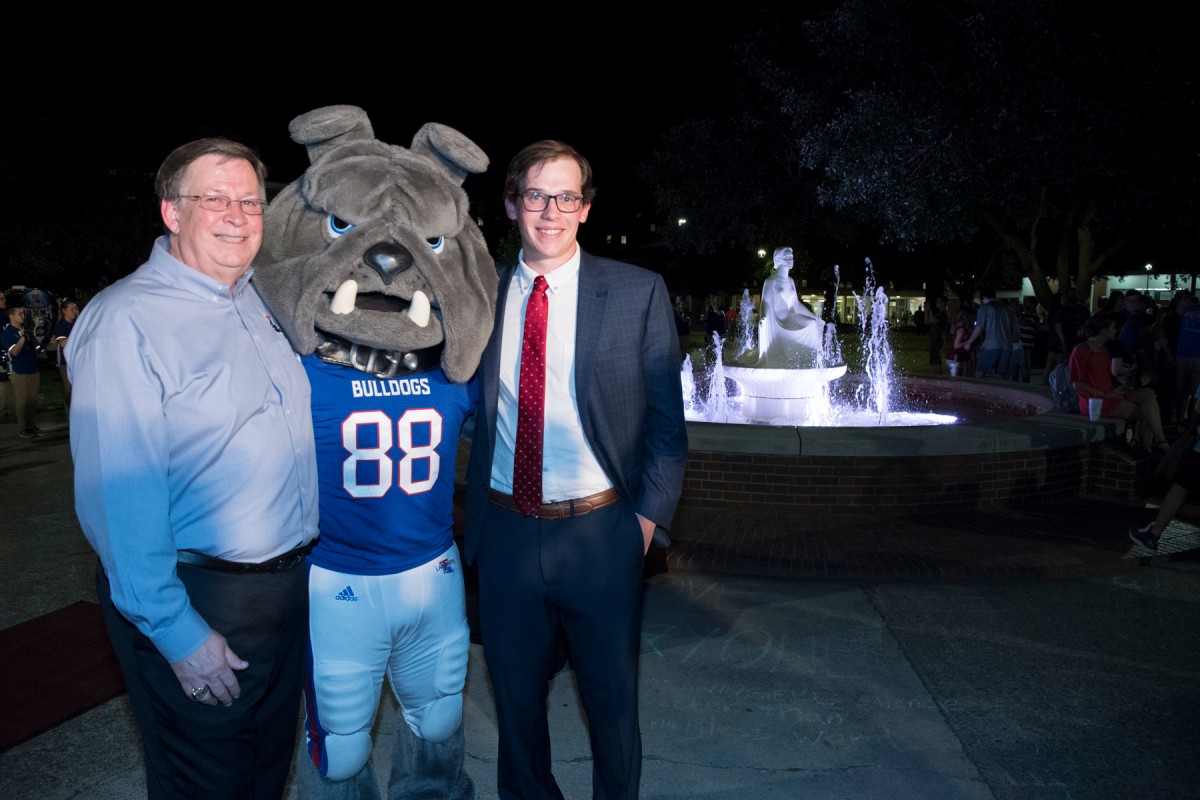 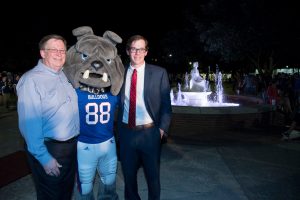 A special ceremony was held on May 14th to celebrate the first lighting of the new LED lights at the Lady of the Mist. SGA President Matt Flynn initiated the ceremony. Emily Mulholland, Tech Panhellenic President, provided some historical perspective on the Lady. Then I made a few remarks and invited Champ to flip a switch to turn on the lights. Jim Robken and the Band of Pride led the  crowd in the singing of Tech’s alma mater as the new lights slowly changed between white and blue. Several students, faculty and staff remained for photos and then headed over to Tech Table for the President’s midnight breakfast. (Special thanks to VP Emeritae Corre Stegall for organizing the event) Here are Emily’s remarks: 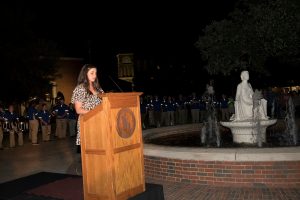 Emily Mulholland tells history of Lady of the Mist

After Tech’s first building, Old Main, burned in 1936, the face of the campus was greatly changed because Old Main stood very close to where we are now. Overnight, the heart of the campus was strangely empty. Old Main had faced the brick columns that are behind Prescott Library, and those columns formed the entry into the campus; a road led to Old Main where the administration, many classrooms, and labs were housed. It was decided that the replacement administrative building would be built on the east of the center of the campus, and so Keeny Hall was constructed. The sad and empty sight of the former location of Old Main led the students and faculty to consider what could be done to beautify the area while establishing yet another important landmark. 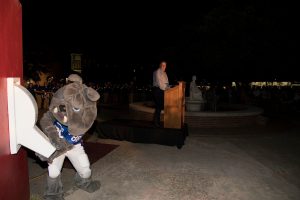 Miss Mary Moffett and Miss Elizabeth Bethea were professors in the art and design department; both were very talented and nationally prominent for their work. They approached the Panhellenic Association officers on the campus with an idea. The first national sorority at Tech had been chartered in 1931, and several other national groups and local sororities were on the campus by 1937. All of the sororities eagerly embraced the idea of the professors that a beautiful and meaningful statue should be commissioned, one that could become a lasting landmark and iconic symbol of Louisiana Tech. The sorority women set about raising the funds and were successful. Miss Moffett and Miss Bethea actually sketched the statue, and the firm of Duncan Ferguson and Jules Struppeck created the cast and made the statue. It was brought to the campus in 1938, and later a fountain was installed with the statue elevated in its center. The statue has always faced the original entry to Tech, today still marked by the original columns. 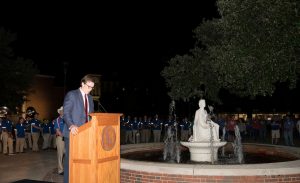 Originally called “Alma Mater,” the statue was named the Lady of the Mist after the fountain was installed around her. The artists explained that her outstretched arms welcomed new students and visitors, extending hospitality and opportunity, and as students graduated and left Tech, her outstretched arms bid them farewell with the hopes that their education would enable them to achieve their ambitions and highest callings in life. The Lady has become an iconic symbol of Tech, and the Freshman Convocation ceremony is a beloved tradition at Tech where the Tenet Medallions are placed in the Lady’s Fountain by freshmen who receive them again at their graduation. Each year, thousands of photos of students, alumni, and friends feature the Lady. This Lady has endured some hardships over the years; she was so vandalized at one point that she was removed for a few years. Feeling the loss, students and alumni banded together to raise the necessary funds, and she was repaired and restored in 1985 through the efforts of the SGA, Panhellenic, Associated Women Students, and the Residence Hall Association. She is truly a treasure to many generations of the Tech Family. 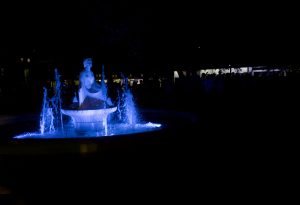 The Lady in Blue

How appropriate it is that the beautiful new lighting of our Quadrangle features special illumination of the Lady of the Mist. This year marks the 80th anniversary of the Lady, so it’s especially fitting that she shines more brightly than ever before. I’m proud to represent the Panhellenic Association that made our Lady possible and all of the groups that have had a part in the history of this special landmark that means so much, our Lady of the Mist.