Great fathers of the Tech Family

This week has provided me with several opportunities to reflect on just how special the history of Louisiana Tech is and how the success that Tech enjoys today is attributable to the work of some great people that have been associated with this institution. Sadly, we lost one of those great fathers of the Tech family this past week, the legendary coach Jimmy Mize. As I sat in his memorial service this week, I was surrounded by many other great fathers, brothers and sisters of the Tech family, all of whom had been touched in their own special way by Coach Mize. People who spanned nine decades of Tech’s history were in attendance at the memorial service, and each one had a book full of stories about the impacts Jimmy Mize had on them. Today, I realized just how blessed I am to serve as president of an institution with such a rich heritage of people like Jimmy Mize. And as I looked around the church, I realized that there are many others who will continue to pass along the same principles and values that they learned from Coach Mize to current and future generations of the Tech family. 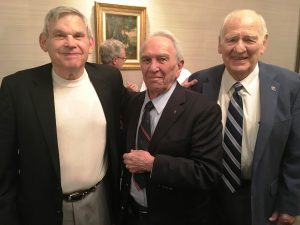 Billy Bundrick, Bobby Aillet and Leo Sanford join me for lunch at the Shreveport Club

I had lunch on Monday with several Shreveport/Bossier alumni to discuss the future of our university. Among those in attendance were some other great fathers of the Tech family, including Bobby Aillet, Leo Sanford and Billy Bundrick. All three of these legends were coached by Jimmy Mize. And Bobby Aillet is the son of the legendary Joe Aillet who is another one of those great fathers of the Tech family. The impacts Joe Aillet had on the athletic and academic reputation of Tech are still felt today. By the way, Bobby, Billy and Leo were honorary pall bearers for Coach Mize along with other great Tech family fathers like Pat Garrett, A.L. Williams and Lindsey “Red” Aucoin. 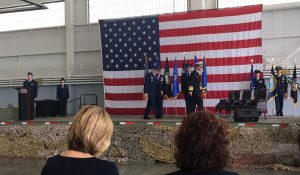 On Tuesday, I returned to Bossier City to attend the Change of Command ceremony for the 8th Air Force at Barksdale. Our friend Major General Richard Clark handed over his command to Major General Thomas Bussiere. Global Strike Command General Robin Rand and StratCom Commander Admiral Cecil Haney presided over the ceremony. We have been fortunate to see and benefit from great leadership at Barksdale, and recognize the impacts they have on our community and nation. Our Bulldogs and Lady Techsters were able to enjoy some special time with General Clark, his wife Amy and daughter Zoie last Saturday when they joined us for Military Appreciation Day. We congratulate Lieutenant General Rich Clark on his promotion and wish him the best as he assumes the Command of the 3rd Air Force in Germany! After the ceremony, I enjoyed a luncheon with new Centenary President Chris Holoman. On Thursday, we welcome another legendary member of the Tech family back to campus for the Bradshaw-Brooks Golf tournament at Squire Creek. Kix Brooks is on campus for a visit with our School for the Performing Arts, a book-signing event at the Tech bookstore, and a little jam session at our house for a pre-game event. Brooks is always a great ambassador for Tech, and we are grateful for his loyal support in so many ways. What a great week to be Loyal Blue!  Hope you enjoy these pics for the week:

The workhorse B52 parked at ceremony.

Modern B-1 and B-2 bombers at ceremony. 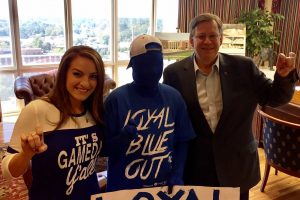 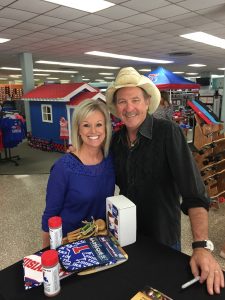