Patrick M. Guice: A part of the nation's greatest generation 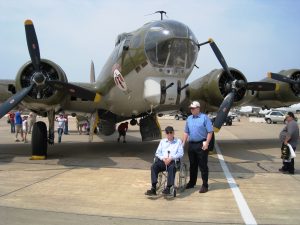 My father was a WW II veteran of the U.S. Army Air Corps, the predecessor to the U.S. Air Force. He was a bombardier for the B-17 Flying Fortress in the 15th Air Force 5th Bomb Wing 2nd Bomb Group that fought in Europe until the end of WW II. Dad never talked much about his service, but near the end of his life, my son Bret did an interview with his grandfather and recorded his responses. Then, just a few months before his death on September 15, 2008, my Dad and I went to the Barksdale “Defenders of Liberty” Air Show where Dad was able to get his first up close look at the B-17 since he had last flown in one over 60 years earlier. That was a special day for me, and I am so glad that Dad had the opportunity to reflect on his time in the service and share more with me about his role as a Defender of Liberty. Special thanks to my friend, Lt. Gen. Bob Elder (ret) for inviting us to the Air Show that day.

As we salute ALL those who served to preserve our freedom on this Veteran’s Day, here’s Bret’s interview with Dad:

A Personal Interview with My Grandfather

When and where did you enlist in the Army? How old were you at the time? I didn’t enlist. My mother wouldn’t let me, so I went up to the selective service board and told them that I was of age and I wanted them to draft me. I was drafted in August of 1943 in Monroe, Louisiana, and was 18 years old at the time. Where did you go for your basic training? What was the training like? I was sent to Fort Humbug in Alexandria for about 6 weeks. I was sent there while waiting to be assigned somewhere else. Then I went to Shepherd Field in Wichita Falls, Texas for basic training for 6 weeks. This was a beautiful place, but the water was almost completely intolerable. Then I went to gunnery school in Arlington, Texas in 1944. I went to armory school at Lowery Field in Denver, Colorado to become an armor. Then I went to Tampa, Florida to study the Norden bombsight.  That was the main training. I had other training such as marching training. I was the squad leader.

The B-17 Flying Fortress

Why was the B-17 called the “flying fortress”? Because of its defensive and offensive armament. It had so many machine guns – defensive. There were eleven crew members including pilot, co-pilot, bombardier, crew chief, radioman, waist gunners (left and right), ball turret gunner, tail Gunner and photographer.  What was your job on the B-17? My job mainly was just bombardier. I had an instrument called Intervalometer that was used for timing of the release of the bombs. The timer’s release related to the distance between the bombs hitting the ground. 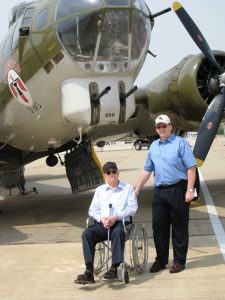 My position was next to the navigator in the nose of the plane. The nose section of the plane was made of Plexiglas about 1/4 of an inch thick.  You felt very vulnerable with just the clear Plexiglas between you and everything else. At the beginning you had a feeling that you might fall out, but you got used to that as you flew more and more. I got scared at times, I guess we all did.  Did the B-17 planes have a support group? Oh yes, I’m glad you asked that. We had fighters who flew P-51s and P-38s. And the blessing to me was the fighter pilots in the P-51s were Tuskegee Airmen. It was very reassuring and comforting to us when fly, beside the anticraft guns, sometimes we were notified in briefing we could expect up to 200 enemy fighters – which were as effective and dangerous as the “flak” guns. It was always a relief to look out and see those beautiful twin fuselage P-38s and also that great P-51 fighter escort plane as our escorts whose sole purpose was to protect us and made us know we were not fighting all the battle.    Where were you stationed during the European campaign? 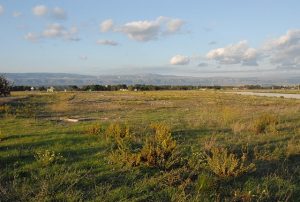 Amendola Air Base in Foggia, Italy as it is today

I was east of Naples on the southeastern coast of Italy near the Adriatic. I was in Foggia, Italy.  Near the end of the war I was on the Isle of Caprice for a rest period. While there one day bells began to ring on the island. And I was very happy to find out the war had ended. That was the war in Europe. The war with Japan was still going on. So after the war in Europe ended, did they send you back home?  No. I was detained with the occupation force until December 1945. The war ended in May, I believe. I flew my last mission on May 1st of 1945.  How were you transported to your base station in Europe? I flew over. And that was a real story there. We lost some of our planes just flying over. The weather was so bad. We flew through the Azores and on to French Morocco, in the Northern corner of Africa. We went east across North Africa to Tunisia and then north to Sicily and finally to our destination – Foggia, Manfredonia in southeastern Italy. 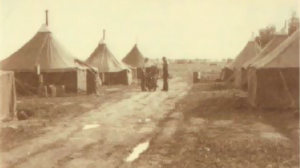 What did your camp look like? Camp was canvas tents. About 4 slept in each tent on cots. For heat, we’d get 50 gallon drums of 100% octane for fuel and put a small tube or faucet attached to the drum and let drops of water come out and fall on some large stones which gave us our heat. Crude, but it felt good when you were cold. That was all we had. Our beds were bunks with “hay” mattresses. The tents housed the whole crew except the officers. What was a typical day like during the campaign? Sometimes we had to go to meetings. They were called poop meetings which simply meant informing us of something going on. We continued our training over there. And we even did some marching. I was the squad leader which meant I counted the cadence. 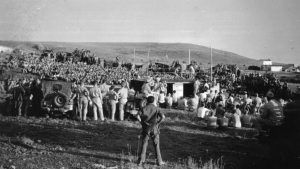 Airmen having fun boxing during a break at Amendola

Generally on weekends we got 24-hour up to 72-hour passes. Almost everybody went to town. You know soldiers.  You flew under the 15th Air Force, 5th Wing, 2nd Bomb Group, and 49th Squadron. What does all that mean? It’s like saying I live in United States, in Louisiana, in Morehouse Parish. It is bringing it down to the smallest group you are associated with. The 15th Air Force is the largest group, 5th wing (within the 15th Air Force) and 2nd bomb group in that. And then the 49th squadron was within the 2nd bomb group.  Did the wing or anything indicate the formation you flew in?

B-17s in formation during WW II

All the planes flying on a raid would be called “Able, Baker, Charlie, Dog, Easy, Fox”. This meant that that was the group within the group. And in “Able box” there would be certain planes or squadrons flying in the group. The planes flew wing tip to wing tip. It seemed like there were 7 planes in a squadron. How many missions did you fly?  I flew on 24 missions. Altogether I flew approximately 300 hours. 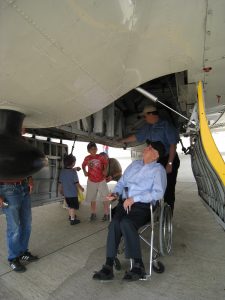 Dad looking up in the B-17 bomb bay