Soundtrack of my life

I have enjoyed meeting with a lot of people this week including prospective students, faculty, staff, deans, vice presidents, community leaders, alumni and corporate partners. That is one of the things that I like about my position, and it is also one of the big challenges – transitioning from one set of issues to something totally different all throughout the day. 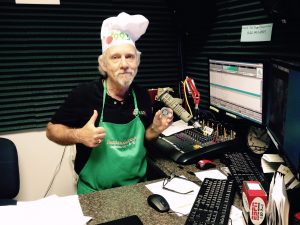 Rick Godley in his studio at The Peach

I had the opportunity to do something totally different today when Rick Godley from The Peach 99.3FM in Ruston invited me to be a guest DJ on his radio program “Rick’s Radio Roux.” Rick has been asking people from the community to compile a list of music representing their life and then inviting them to join him in discussing the music in context of their life. This was something that I enjoyed doing, and I particularly enjoyed the opportunity to reflect on some of the music that I have listened to over the past 40 years. I told Rick that my initial roots were in gospel music (Dad was a pastor and Mom and my brother sang at “singings”.) We went to a lot of Southern Gospel concerts in my early days. During high school and college, I got more into some of the music of the day like pop and rock. Then, when I went to Tech as a student in the early 70s, we had folks like Bill Withers, Stevie Wonder, Jim Croce, Nitty Gritty Dirt Band and other great artists who came to Tech for Union Board concerts and that broadened my musical interests. My sons also influenced our musical portfolio although I must admit that I still don’t understand some of the things that they were listening to. I still enjoy classic and contemporary gospel music, and Kathy and I really enjoy Broadway musicals whenever we can get to see them. But as Rick acknowledged during the program today, my taste is pretty eclectic. The “Soundtrack of my life” includes eleven songs that represent different periods and transitions during my personal and professional life, most which involve my time of association with the university. Here is the list that I gave to Rick: I hope some of you can relate these songs to your own life.