Home › Weekly Update › A short story for a long week

A short story for a long week

This week was a short one for me in the office, but a long one on the road. I took a personal day on Monday but wound up working at home. Still, it was nice to get some quiet time to let me do some preparation for other activities coming up later this summer. My calendar is already packed for July and I will be out on the road quite a bit meeting with alumni as well as corporate and community leaders.

On Tuesday, I met with AD Tommy McClelland to catch up on Tech’s athletics activities. I also went to the Marbury Alumni Center to meet with the University Foundation staff to provide updates on the search for the Vice President for University Advancement. After lunch, I had budget meetings with our two newest Deans, Gary Kennedy and Chris Martin, as well as with Chief Innovation Officer Davy Norris. Tuesday night, Kathy and I attended the Peach Festival Dinner at Squire Creek to hear State Treasurer John Kennedy speak. John reminded us all that he spent a year at Tech and that his brother graduated from Tech. John gave an excellent presentation and highlighted a number of things about Louisiana Tech in his remarks. Kathy and I got up early Wednesday so that I could attend a Board of Regents Support Fund Advisory Committee meeting in Baton Rouge. Later Wednesday, the University of Louisiana System presidents met with ULS President Sandra Woodley to discuss budgets and recent legislative actions. Wednesday night, Dr. Woodley hosted a reception to recognize outgoing Grambling State President Cynthia Warrick and incoming President Willie Larkin. 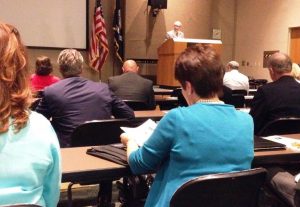 The University of Louisiana System Board met on Thursday morning and we had a few items on the Board’s agenda that were considered and approved. After lunch, Board of Regents Commissioner Joe Rallo hosted a higher education roundtable summit at the Pennington Biomedical Research Center. Late Thursday, I headed north through Shreveport to go to Dallas for a full day of interviews with candidates for Vice President for University Advancement. I met several members of our search team there and we had a productive day talking to the prospects. Getting out of Dallas late Friday afternoon was not easy because of all of the traffic and that gave me greater appreciation for living in Ruston. I did make it home late Friday night but was a bit frazzled after all of the driving. Looks like it will be more of the same next week.