A monster comes to Ruston 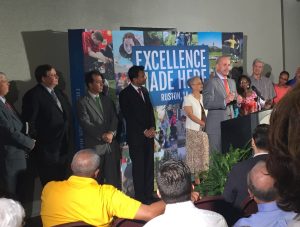 Louisiana Tech and the City of Ruston welcomed a new friend and partner to the community this week. Before a large crowd of local business & community leaders and public officials, Monster Moto announced their decision on Wednesday to locate their headquarters and manufacturing operations in Ruston. They will employ almost 300 people to build minibikes, go-carts and other youth-oriented vehicles, moving those operations to Ruston from China. Mayor Ronny Walker did a great job of selling them on Ruston with several others in the community stepping up in significant ways to make this all happen. Monster Moto CEO Alex Keechle made it clear in his announcement that the main attraction for them was the talented students at Louisiana Tech. And Alex has big plans for engaging our students and faculty with his company and a vision for even greater things in the future. Wednesday proved to be a great day in the midst of a hectic week. Check out more about Monster Moto here! On Monday, I traveled down to Baton Rouge to attend an important meeting of the Board of Regents Support Fund Planning Committee where we made some recommendations for the Board to consider regarding its eminent scholars chairs and professorships program. 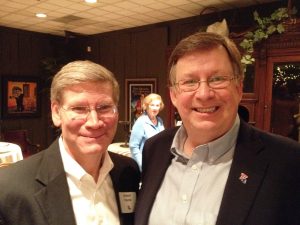 Meeting up with Mark Mann, one of my best college friends, in Little Rock

On Tuesday, I spent the morning in meetings with some of my team members as well as a couple of prospective students. Then, Ryan Richard and I headed north to Little Rock for a “Tech’s in Town” event. It was a great evening as we had the opportunity to renew relationships with long-time friends and make connections with more Tech alumni. AD Tommy McClelland and Coach Skip Holtz gave overviews of our athletics programs, and I spoke about other recent Tech activities. Thursday was another full day as I spent time in meetings with some of my Vice Presidents and SGA President Maggie Brakeville. I also attended the College of Applied and Natural Sciences research symposium in the Tonk which included awards and recognitions for students, faculty and staff. After lunch, we had a meeting of our Administrative and Planning Council. 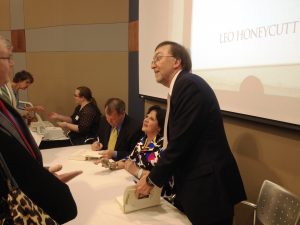 Late Thursday afternoon, we were pleased to welcome CenturyLink CEO Glen Post to campus to introduce Leo Honeycutt’s outstanding book on CenturyLink’s founder Clarke M. Williams. Clarke’s daughter Carolyn Perry joined Leo and other friends for a reception and an overview presentation of the book. I was particularly pleased to have Tech alumni Earl & Bobbie Hogan, who were good friends with the Williams family. Earl’s father actually sold the home-based Oak Ridge Telephone Company to Clarke Williams that ultimately led to the 3rd largest telecommunications company in the nation, CenturyLink. I encourage you to check out the book with its inspiring message and stories reflecting people and communities in north Louisiana. 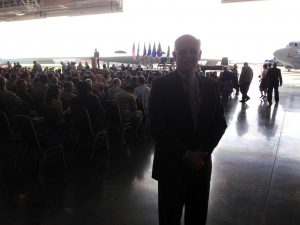 On Friday, I went to Bossier City to attend the Changing of Command ceremony for the 8th Air Force at Barksdale Air Force Base. In an impressive ceremony, Maj. Gen. Scott VanderHamm transferred the command to Maj. Gen. Richard Clark. Also participating were Global Strike Commander Lt. Gen. Stephen Wilson and Stratcom Deputy Commander Lt. Gen. Jim Kowalski. We are grateful for the service and leadership of such fine men. The impacts of BAFB on Northwest Louisiana are significant and Tech continues to support the base and community in numerous ways.

B2 and B52 bombers at Barksdale