This week began for me with a meeting of the University Foundation Executive Committee to discuss future development plans for our Foundation, the primary fund-raising arm of the university. We have been blessed with strong support from our alumni and friends whose commitment to the institution through private gifts has enabled Tech to continue a positive trajectory as a nationally-recognized research university. 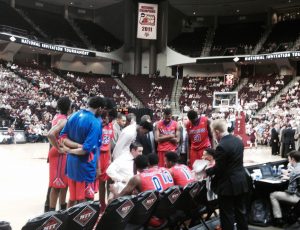 Bulldogs in final timeout before win at Texas A&M

Other Monday meetings included visits with my communications director, Dave Guerin, and SGA President Maggie Brakeville. I also had a conference call with ULS President Sandy Woodley and other system presidents who were getting updates on the higher education budget. I was pleased to join Ruston Mayor Ronny Walker and others at noon to discuss a potential new Ruston business opportunity.  Later in the day, I joined several others for a trip over to College Station, Texas to watch the Bulldogs defeat Texas A&M University in their 2nd round NIT basketball game.  That proved to be a great victory for our team, over an SEC team and on national television, bringing positive recognition to Tech in this season of March Madness. Tuesday morning, I had a visit from a Minden alumnus who brought a couple of high school students by for a campus tour. I appreciate the introductions to prospective students that our alumni and friends make for us, and I always enjoy meeting with these students when they come to campus. 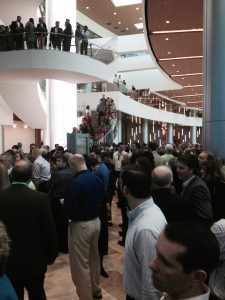 Later Tuesday morning, VP of R&D Stan Napper and I made a trip to Monroe to visit with our CenturyLink and IBM partners to discuss the educational needs for IBM in their new applications development center in Monroe. Stan and I were also invited to attend the ribbon-cutting ceremony for CenturyLink’s new Technology Center of Excellence. This is an amazing facility that is on par with anything that you will find in Silicon Valley, Austin, or any other high-tech metro area in the U.S. CenturyLink and IBM are in the midst of filling over 1200 new high-skill jobs in Monroe as a result of these recent investments, and we are working to ensure that Louisiana Tech graduates fill many of those jobs. I had planned to go to the Board of Regents meeting in Baton Rouge on Wednesday, but decided to stay in the office to get caught up on budget planning and other activities. My assistant, Carrie Flournoy, was quite pleased to see me get some of the piles cleared off my desk. 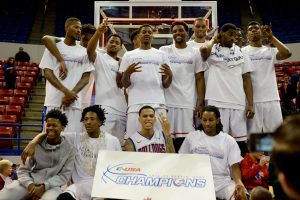 Wednesday evening, the Bulldog basketball team went to Philadelphia to play Temple University in the NIT Quarterfinals. Temple proved to be the better team on the court that night, but I would not have traded teams with them (or anyone else in the nation) under any circumstances. Coach Mike White and his three seniors, Speedy Smith, Raheem Appleby, and Michale Kyser, have won the hearts of Tech fans through their character, leadership and tenacity. Their athletic performances on the court and their behavior off the court have set new marks of excellence for Tech basketball. While Tech’s involvement in March Madness ended on Wednesday evening, there was a deeper sense of pride throughout the Tech Family that will last far beyond this season. On Thursday, I had some meetings with my administrative team and the Administrative & Planning Council. Assistant VP Sam Wallace made a presentation to the APC on the new water distribution project that will soon kick off on our campus. It will create some challenges and obstacles on campus for the next few months, but will provide us with a new water infrastructure that will serve the university for decades to come. Sam also gave APC a brief overview of the new campus master plan that will guide us in campus facilities and amenities over the next several years. 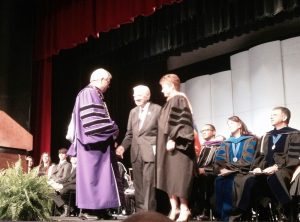 On Friday, I made a trip over to Natchitoches to celebrate the Presidential Investiture of my colleague Jim Henderson, the 18th President of Northwestern State University. While Tech and Northwestern have been bitter athletic rivals over the years, there are many strong ties between the alumni of these universities. Jim Henderson will be an excellent President for the institution. On Friday evening, we will have a great event in Tech’s Student Center recognizing major benefactors of the institution. This is our primary event of the year where we can thank those who have given significantly to Tech while showing them some of the impacts of their gifts. On Saturday morning, we will hold a special commencement exercise to recognize three Lady Techsters who were not able to attend the Winter Quarter commencement because of a game conflict. Congratulations to these student athletes for their commitment to their education and for their success both on and off the court!