Sweeping off the snow

I returned to Ruston on Thursday morning after spending the first part of the week in south Louisiana where I had avoided the ice and snow. But the chilly weather in Ruston left a few patches of snow around when I returned and Kathy put me to work sweeping it off the sidewalk. Classes started at noon Thursday, so students and faculty began to get back in the swing of school just in time to take finals. 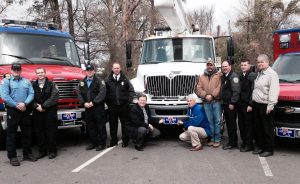 I was able to make it over to the Ruston Civic Center parking lot at noon to join Mayor Ronny Walker and members of the public works, police and fire departments in putting Louisiana Tech license plates on city vehicles. I appreciate Mayor Walker’s leadership in promoting the university visibly throughout the city. I particularly like the red and blue fire trucks and emergency response vehicles. There truly is a special relationship between the city and university and that bodes well for the future of both. 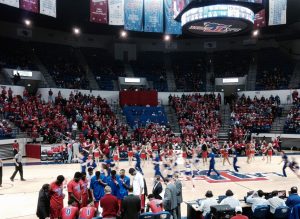 Red Out night for Bulldogs as the defeat UTEP

After a few meetings with students and staff on Thursday afternoon, I headed to the house so Kathy and I could host some friends for dinner before heading over to the TAC to watch the Bulldogs take on Conference USA foe UTEP. The Bulldogs pulled off a major victory over the Miners before an energetic crowd of Tech students and fans, setting the stage for a conference championship with a win in one of the final two games for the regular season. The Conference USA tournament begins on March 10th in Birmingham and I look for a good Tech crowd to be in attendance. 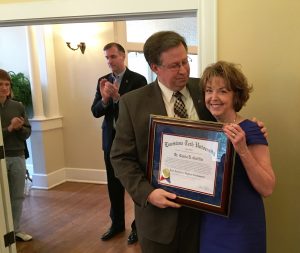 On Friday, I was back in the office for more meetings with my administrative team and students. Later Friday, I attended a retirement reception in the Ropp Center for Dean of Student Development, Dr. Linda Griffin. I was honored to present Linda with a Dean Emerita certificate in recognition of her tremendous service at Louisiana Tech. Linda has done so much to enhance our student life programs and has helped countless students achieve success while at Tech. Perhaps one of her most impactful achievements was establishment of the First Year Experience. 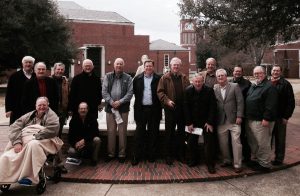 Pikes join for photo at Lady of the Mist

On Saturday, I had the pleasure to meet with Tech alumni members of the Pi Kappa Alpha fraternity from the late sixties and early seventies. Terry Ewing and Hollis Downs helped to organize the reunion that began in the Wyly Tower Auditorium with a campus update and peek at the new campus master plan. After that, Ryan Richard and I took the Pikes up to my office so they could get a perspective of the campus while reflecting on their time here in some of the same buildings over 4 decades ago. After a walk through University Hall, we strolled past the Lady of the Mist and through Centennial Plaza where they were able to find their alumni bricks. We wrapped up the tour with a lunch in the Ropp Center. Kathy and I thoroughly enjoyed the time with the Pikes and look forward to them returning in the future. We would welcome the opportunity to meet with other groups who would like to return to campus for a reunion. 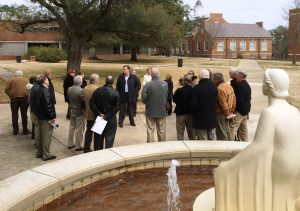 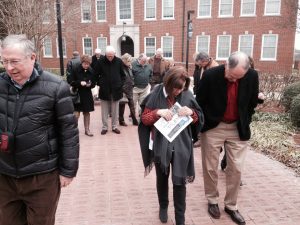 Pike alumni and spouses find there bricks in Centennial Plaza

Now, its time to get ready to watch the Bulldogs beat the UTSA Roadrunners and seal the deal on at least a share of the Conference USA championship. Hope to see you there, too!