Snowed out of Ruston – making the most of it 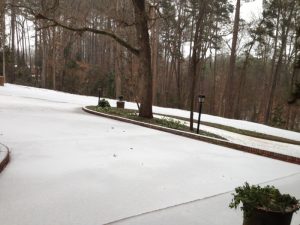 The first icing of the week

I headed out of Ruston on Sunday afternoon after weather reports began to predict freezing rain, sleet and ice for Ruston on Monday. The Board of Regents was scheduled to meet Monday afternoon and I had also arranged a couple of special meetings with alumni. My decision to leave early was a good one, and I made all of my Monday meetings in Baton Rouge. Late Monday afternoon, my Emergency Response Team and I made the decision to cancel classes for Tuesday because of the additional wintry precipitation occurring overnight on Monday and expected low temperatures on Tuesday. 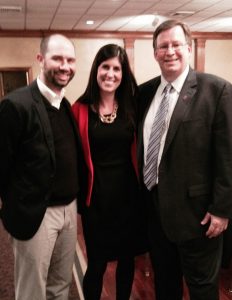 On Tuesday, I attended a meeting of the University of Louisiana System board in Baton Rouge. We had a couple of items on the agenda – and I also wanted to pick up the latest news about the higher education budget situation. After the ULS meeting, I headed over to Lafayette for a “Tech’s in Town” alumni event that had been scheduled several weeks ago. On the way over, I received a call from VP Corre Stegall who told me that she and others were iced in and could not get out of Ruston in time to make it to the Lafayette event. We decided that I would go ahead and host the event myself, and Corre made some calls to get a couple of our attendees to help me greet our guests and get them registered. Special thanks to Mr. and Mrs. Tommy McClelland (AD Tommy’s parents) and alumnus Red Aucoin for coming to the rescue! I know that those in attendance were disappointed to not be able to hear from Tommy or Coach Skip Holtz, but I did my best to cover some of the exciting athletics happenings in my remarks. We had a good turnout at the Petroleum Club including alumni, friends and a prospective student. Everyone seemed to have a good time, and were very happy that we continue to reinforce Lafayette as Bulldog Country. We made the decision to cancel classes on Wednesday because of a second snow event that was expected to hit over night and early on Wednesday. This was not a great time for us to miss another day of school since we are closing in on finals, but it was apparent that it was a good decision as snow began accumulating Wednesday. Meantime, I had two more excellent meetings with alumni and friends in the Lafayette area Wednesday morning. 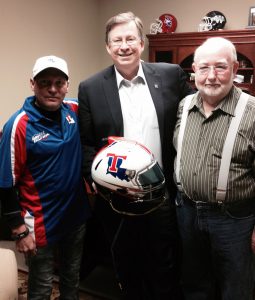 I thoroughly enjoyed visiting with Don Mashburn who owns a business in Broussard. He has one of the finest machine shops that I have ever seen and he specializes in innovative drilling products for the oilfield. While I was there, a couple of other special Tech alumni, Brennan Easley and Bubby Day, stopped in for a visit. We were also joined by one of the newest members of the Tech Family, Buster Graham, who was the driver of the Louisiana Tech #17 NASCAR-style stock car that ran in the Lucas Oil 200 race at Daytona. Buster brought his special “Tech” helmet and racing suit by for us to see. It was terrific to talk to him about the race and to learn more about the sport of auto racing. I told him that he had clearly won the hearts of Tech alumni, and that I am sure that we will all be following him as he takes #17 to Talladega in early May. 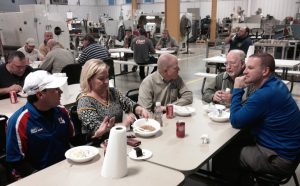 Enjoying gumbo & potato salad with Don, Buster and friends in the machine shop 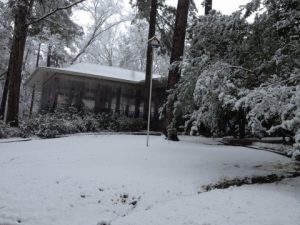 Snow at the Prez’s residence makes my trip home treacherous

As I was getting ready to leave Lafayette early afternoon, Kathy sent a few images of the snow building up around the house in Ruston. I made a few calls to Chief of Police Randal Hermes on the way home and decided it would be wise to stop in Alexandria for the evening. This week has been quite a disruption for the campus, and I know that many have been inconvenienced by the circumstances surrounding the weather. But, it has also been one of those few special times when we in Ruston get to taste and enjoy the beauty of winter. And I got to make the most of the weather events by staying in South Louisiana to visit with other members of the Tech Family.