Louisiana Tech has received a lot of national press and marketing over the past few days, and from some unexpected places. Our academic and athletics programs have certainly received good national visibility over the years, and we are proud of their impacts in elevating the recognition on the institution nationally. But over the weekend, we have received some special attention from different markets than we normally attract. 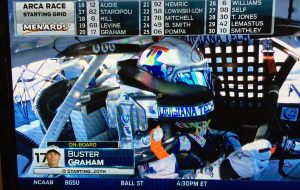 Buster Graham on an in-car camera while racing

On Saturday, thanks to the generosity of a benefactor, there was a Louisiana Tech-branded professional stock car running in the Lucas Oil 200 at the Daytona International Speedway. The ARCA Racing Series season opener was broadcast nationally on Fox Sports 1. Driven by Lafayette-native Buster Graham, the #17 Louisiana Tech car made a good race of it until getting knocked out by another car that crashed directly into the front of Buster. We look forward to watching Buster race the Louisiana Tech car again on May 1 at Talladega Superspeedway, and we hope to have him and #17 on the Tech campus sometime this spring. 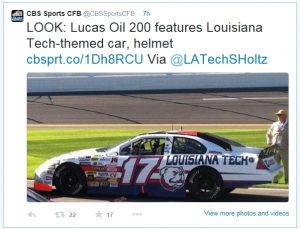 Several Tech fans were tweeting about Buster’s progress during the race. We were pleased to see a tweet by Coach Skip Holtz that got picked up by CBS Sports College Football. They even included a couple of my tweets in their on-line article. http://mweb.cbssports.com/ncaaf/eye-on-college-football/25070497/look-louisiana-tech-had-its-own-car-and-helmet-at-lucas-oil-200. Yahoo! Sports also wrote a nice online article featuring the Tech vehicle: http://sports.yahoo.com/blogs/ncaaf-dr-saturday/buster-graham-s-racing-helmet-looks-like-la-tech-s-football-helmet–photos-234207808.html 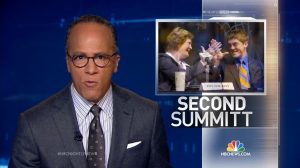 On its Sunday evening newscast, NBC Nightly News broadcast a special feature on Coach Tyler Summitt, head coach of the Lady Techsters. This feature named “Second Summitt” talked about Tyler’s continuing of the Summitt legacy created by his mother, Pat, at the University of Tennessee. http://www.nbcnews.com/nightly-news/video/new-summitt-in-charge-at-tennessee-rival-399618115782. Earlier this year, Tyler had been featured on CBS‘s 60 Minutes, ESPN, USA Today and other national media. In addition to doing a great coaching job so far this season, Tyler has been great at drawing national visibility to Tech, and he always uses that as a positive way to develop our Lady Techsters program. 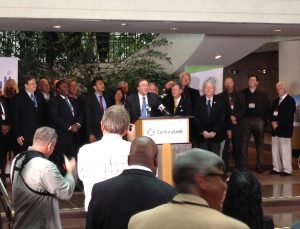 Glen Post and Governor Jindal making the announcement about IBM

Today, there was a big announcement by Governor Jindal and Tech grad and CEO Glen Post of CenturyLink at the company’s headquarters in Monroe. It was announced that IBM is opening a new Applications Development and Innovation Center in Monroe adjacent to CenturyLink, bringing at least 400 new high-tech jobs to the area. Louisiana Tech will continue to play an important role in supporting the growth of the IBM and CenturyLink workforce. We have maintained strong relationships with both companies for the past several years. In addition to the new facilities for IBM, there was the announcement of a new up-scale living community that has been master-planned and will be developed in the area. See pictures of the development at the bottom of this page. Here is the Tech press release on the announcement: http://news.latech.edu/2015/02/17/louisiana-tech-continues-to-support-states-high-tech-workforce-growth-opportunities/

Finally, I must mention another effort made by some of our alumni in Shreveport, particularly Cynthia Pettiette, Russ Friedrich, Cameron Cockrell, and Paul & Anita Cormier, who created and included a Tech float in the Shreveport Mardi Gras parade. Thanks for keeping the name of Louisiana Tech in front of that community that is so important to us. 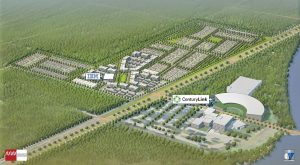