Home › Weekly Update › Champs in the Heart of Dallas

Champs in the Heart of Dallas 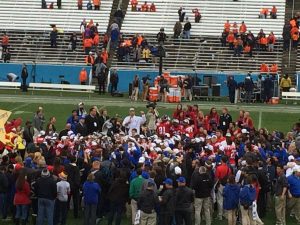 Skip Holtz speaking to Tech fans after the game

The Bulldog team and many Bulldog students, alumni and fans left Dallas late Friday afternoon celebrating the Bulldogs’ huge victory over the Illini in the Heart of Dallas Bowl. Coach Holtz and the Bulldogs end the 2014 season with the well-deserved title of Champs! And anyone who watched the Heart of Dallas Bowl game knows that the better team won. There were plenty of major contributors to the win, but former Illini and current Bulldog Houston Bates played with a huge heart on defense with an incredible 5 1/2 sacks and was clearly deserving in winning the MVP trophy.  Junior Kenneth Dixon also set a Tech yardage rushing record and sophomore Xavier Woods made a spectacular interception return for a touchdown. And many other Bulldogs contributed to the win in huge ways.

Spirit groups performing at the Tailgate

A special thanks goes to all of the Tech fans who made the trip to Dallas to join the Bulldogs in the victory. We had a great turnout at the morning Alumni Tailgate inside the Tower Building beside Cotton Bowl Stadium. Jim Robken and the Band of Pride showed up along with the Tech cheerleaders and Regal Blues for a pre-game pep rally. I appreciate the dedication and positive spirit that these students contribute to all of our athletics events throughout the year. 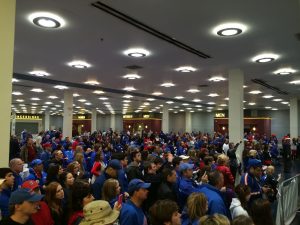 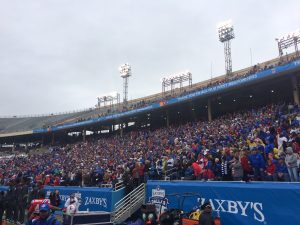 Skip listening to his father Lou as he makes remarks

I had a special treat as I joined in with the Bulldogs in their locker room celebration. Coach Holtz praised the players and coaches for their victory. He also thanked loyal fan Cael Carmichael for his inspiration to the team. Everyone joined in singing the Tech fight song. There was another special guest in the locker room, Skip’s father Lou, who was also invited to make a few remarks.  What a day! And a great way to wrap up the week in Dallas, a week that will undoubtedly positively impact our university for a long time. 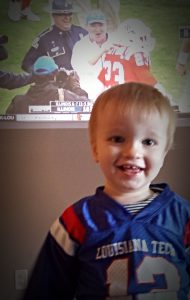