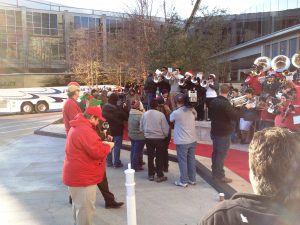 John Horn Band of Mesquite at the Omni Hotel

For some of us, Christmas came a day early this year. I was sitting in my hotel room this morning when I heard a band playing downstairs. I went out to see what was going on, and there were hundreds of people gathered at the entrance of the hotel and a high school band was outside playing Christmas music. I have seen the Tech band playing at hotels as the teams are entering and leaving, but I knew that nothing like that was on the schedule for today. As I walked over closer to the band, someone began walking towards me and, as he approached, asked if I was Dr. Guice. He introduced himself as Todd Burke, a graduate of Louisiana Tech and Director of the John Horn High School Band of Mesquite, Texas. I was thrilled to meet him and asked what was going on. 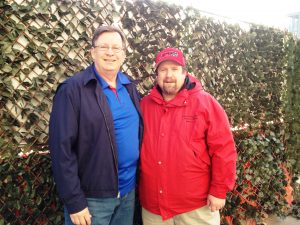 Todd told me that the band, their families, and community volunteers were there to welcome 500 homeless people to the Omni Hotel for the night. They would have a warm place to spend Christmas night and would be treated well by hotel staff and community volunteers. Shortly after we began talking, some police escorts drove up followed by several buses. The crowd began to form a welcome tunnel and the band interchanged Christmas music with the Rocky theme as the special guests exited the buses. Everyone was warm, welcoming and giving holiday greetings as the guests walked through the people tunnel. In the emotion-filled event, I saw smiles, tears, and a few solemn faces. Many were carrying their possessions in plastic bags and backpacks. It was clear that there were some who were overwhelmed with the experience. 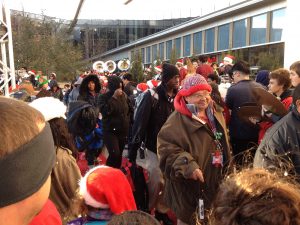 Homeless guests being welcomed by the community 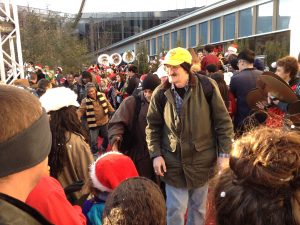 Guests being greeted with holiday wishes

Guests being organized by groups and led to their hotel rooms

After watching the first few buses unload, I went inside the hotel and saw AD Tommy McClelland and some others standing to watch and welcome the guests. None of us really wanted to leave. And as we watched, we reflected that each of those individuals had their own life story to tell, and undoubtedly, a life that had been presented with some hurdles and hardships. But on this one special day, it was like Christmas for all, and we were all grateful to be a part of what this community was doing to help those who needed to be lifted. This experience really helped us to push the reset button on the chaos of the holidays and to focus on the true meaning of Christmas. Thank you Omni Hotels and Dallas community volunteers for making this a special day. 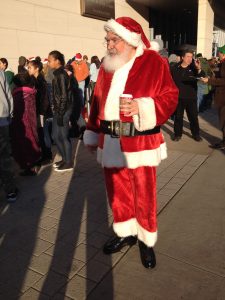 Santa made his appearance a day early