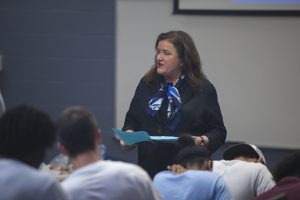 Mary Margaret Livingston is originally from Birmingham/ Mountain Brook, Alabama, and graduated from Abbot Academy (now Phillips Andover Academy), in Andover, Massachusetts. She earned the B.A. from the University of Michigan, where she served on the Student Government Council, Joint Judiciary, other student organizations and on faculty/student committees. Mary Margaret noted, “It was at Michigan that I fell in love with universities, their mission, organization and atmosphere. I was exhilarated by the original sources in the libraries, the speakers and artists on campus, and to be in a place where ideas were taken seriously.”  She majored in philosophy at Michigan with interests in phenomenology/philosophy of the mind and contemporary poetry. She spent one summer studying English at Harvard. After graduating from Michigan, Mary Margaret worked as a psychology research assistant in the Dental School at the University of Alabama at Birmingham. She showed school children attitude change slides on dental hygiene and then came back later to check whether they were brushing their teeth more often. The job required enrollment as a student. UAB had few philosophy courses, so Mary enrolled in psychology classes.  She reflected, “It was quite a change from abstract philosophy. I was shocked the first day of physiological psychology class when Professor David Sparks walked in and without explanation dropped a human brain on the table in front of me, summarily cut it in half and pointed out the pineal gland. All I could think was Descartes said that ‘the pineal is the seat of the soul’.” After completing her bachelor’s degree, Mary Margaret entered the master’s program and was UAB’s first psychology master’s graduate. After graduation, she went to work at The Children’s Hospital Children and Youth Project as an assistant psychologist. Then, Mary enrolled in the University of Alabama at Tuscaloosa to pursue the doctorate (the fourth generation of her family to be an Alabama student). At Alabama, Mary Margaret was inspired by Dr. Annette Brodsky, then head of the APA women’s division; Dr. Ray Fowler, an early developer of the MMPI and later president of APA; and as well as learning theorist Dr. Paul Siegel and behaviorists Dr. Paul Weisberg and Dr. Charlie Richart.

Making a presentation at the Psychology Banquet with Dr. Tom Springer

While in the PhD. program, Mary Margaret performed assessment and evaluation for Dr. Al Peyman, making sure the Wyatt vs. Stickney ruling was enforced. Mary commented, “The ruling required ‘adequate’ treatment for patients in state mental institutions and annual evaluation for every patient’s treatment plan. Later during the summer breaks, I was selected for a traineeship at McGuire VA hospital in Richmond, Virginia, working primarily with drug addicts, paraplegics and quadriplegics and performing neurological assessments. After completing coursework, I held an APA internship at University of Arkansas for Medical Sciences in Little Rock. I was excited to study with Drs. Peters and Clements who had discovered Minimal Brain Dysfunction, now called ADHD. At the Southeastern Psychology Association conference, Louisiana Tech’s Dr. Jim Williams interviewed and hired me and Dr. Jerry Tobacyk, and Dr. Barlow Soper doubling the size of Tech’s then small psychology department.” Mary Margaret began teaching at Louisiana Tech in the fall of 1977, approximately 37 years ago. She observed, “To put that in perspective, I have served under three presidents, four and soon to be five deans, and eight department heads. During that time, the Department of Psychology and Behavioral Sciences has grown both in the number of faculty and students, and we now offer two doctoral degrees in addition to the master’s and undergraduate degrees.” 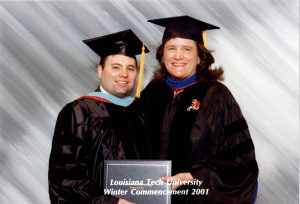 With an early PhD in Counseling Psychology graduate Garth Bellah

When asked about her teaching interests, Mary Margaret responded with passion, “One consistent focus throughout my time at Tech has been on students. Students are the heart of the university and occupy a big place in my heart as well. One of the most flattering moments I have had was being selected by the students and colleagues as the university outstanding advisor. Teaching and advising are hugely satisfying parts of being a professor.” Mary is the undergraduate psychology coordinator and director of the human services concentration in the counseling and guidance master’s program. Mary Margaret pioneered  large auditorium sections of psychology so that students could more easily take introductory psychology. She noted, “I reinvented my teaching style to deal with the larger number of students. Technology has had perhaps the biggest impact on my teaching and revolutionized the way learning occurs at universities. I was fortunate to be in the College of Education with Dr. Lejeanne Thomas and others who were early adopters of educational technology and wrote the standards for the nation. Technology caused me to reinvent my teaching style again. Smart classrooms sponsored by student technology fees enable an instructor to have the greats of psychology explain and demonstrate their research. Simulations and online resources have made tremendous changes in the classroom. Now there are many more opportunities for students to actually see master therapists and researchers at work.” Mary Margaret has extended her teaching well outside the normal campus boundaries. She has taught online psychology classes to k-12 teachers, and has taught courses at the Wade Correctional Center, Grambling, and Barksdale Air Force Base. 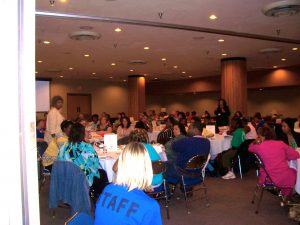 ABCs of Transition program with GEAR UP Counselors

Mary Margaret’s interests in college transition has influenced her research. She said, “Dr. Alice Carter and I have researched math anxiety and student achievement. For the last several years, I have published in The Mentor and Advising Journal, a journal largely dedicated to research and theory on college student retention, advising and transition issues. Earlier I researched gender–role issues and research ethics and other topics. I have published in the New England Journal of Medicine, Journal of Counseling and Psychotherapy, Psychological Reports, the Electronic Journal of Business and Organizational Ethics, Journal of Psychological Type, and others. Along the way I have continued to present my research at state, regional and national conferences.” Mary Margaret is very active in the university community. She serves as chair and expedited reviewer for the University Human Subjects Committee/ Institutional Review Board (IRB). She noted, “I have been a part of this committee since it was initiated by then Dean of Research Dr. John Maxfield and Dr. James Green. This federally mandated committee protects research participants, many of whom are students. My background in philosophy and psychology have helped me in working with the IRB.” Mary Margaret can often be found serving her university, community and profession on numerous committees. She is a member of a variety of professional organizations including the American Federation of Teachers, Association for Psychological Science and American Counseling Association.”

Enjoying one of her interests – duck hunting in the 1990s

Mary Margaret is married to Brian Hindman, a pharmacist and poison control specialist with Louisiana Poison Center at University Medical Center in Shreveport. They live in Ruston, in the house Tech president Ropp lived in when he retired. Brian and Mary Margaret have two children, Margaret, age 22, who is a student in Louisiana Tech’s Counseling and Guidance master’s program, and Jim, age 25, who lives in Alabama.