Home › Faculty Feature › Brad Cicciarelli: From Gator to Bulldog with a little help from MIT

Brad Cicciarelli: From Gator to Bulldog with a little help from MIT

Brad Cicciarelli grew up in the Florida panhandle and attended the University of Florida, studying chemical engineering because he enjoyed math and chemistry. Brad noted, “It turned out to be a good fit for me and I enjoyed the breadth of topics covered in the curriculum: material balances, thermodynamics, fluid mechanics, heat transfer, reactor design, separations, etc. I also had the opportunity to complete three summer internships at a nylon manufacturing facility and appreciated seeing practical applications of what I was learning in the classroom. During my time as an undergraduate student, I really respected and admired my professors and thought that the academic profession and lifestyle seemed appealing, so I decided that I would attend graduate school and try to join their ranks. I applied and was accepted at several schools and decided to attend MIT because of its history of excellence in the field and because I wasn’t sure what research area I wanted to pursue, and its ChemE department had the largest number of faculty and potential projects.”

Brad and Jamie at their alma mater

At MIT, Brad worked on a project studying light-responsive surfactant molecules which could rapidly change their shape when exposed to light of different wavelengths and thereby induce significant changes in solution properties like surface tension and viscosity. While a graduate student, Brad also had some opportunities to assist in teaching courses and found that he really liked helping and interacting with students. During his time in Cambridge, Brad met his future wife, Jamie, who was a graduate student in the biology department. When Jamie finished her PhD, she moved to Ruston and eventually got a faculty position in the biology department. I featured Jamie in one of my recent blog posts.

Brad doing what he enjoys most: teaching thermodynamics

Brad eventually decided that he liked the teaching and mentoring aspects of academia much more than the research side of academic science, so when he was finishing his PhD, he sought out teaching-focused faculty positions. Brad commented, “Louisiana Tech was one of the few universities advertising openings for teaching faculty in engineering, so I applied and was impressed with Tech’s commitment to undergraduate education during my interview. I was offered a Lecturer position to be shared between the chemical engineering and mechanical engineering programs, and I accepted and joined the Tech faculty in 2007.” Brad has taught a variety of classes during his time at Tech, including several undergraduate lecture courses (material balances, thermodynamics, heat transfer, mass transfer, etc.), undergraduate laboratory courses, and a graduate course in transport phenomena. He has incorporated clickers and active learning techniques into the classroom to keep students engaged during lecture, and he has developed pre-recorded video demonstrations of laboratory experiments to help students prepare for experiments they will be performing in lab classes. As for the impacts of these efforts, Brad noted, “All of this has made time spent in class more productive and efficient and has received positive feedback from students. In fact, this latter innovation has resulted in a publication in an engineering education journal. I also like to challenge students and give them assignments and exams which require critical thinking in addition to mastery of the course material. I hold high academic standards in my courses because I want to ensure that students are well-prepared for future employment and I want their diploma to have value.” 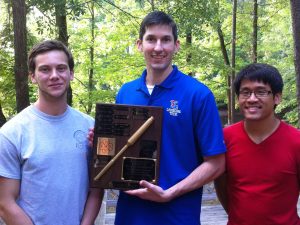 Brad’s level of rigor in his classes and the high expectations he has for his students has earned him the Golden Shaft award (given to the professor maintaining the highest standards) from graduating mechanical engineering students for 5 of the past 6 years. He also been received several Outstanding Faculty awards from the College of Engineering & Science and the 2013 F. Jay Taylor Undergraduate Teaching Award. Brad advises the AIChE student group which hosts speakers from various local chemical engineering industries and takes part in community service events such as participating in the Big Event. 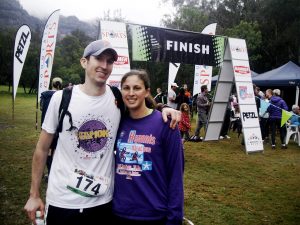 Brad & Jamie after a half marathon in Australia

Brad is a sports fan and, as a proud UF alum, he cheers for the Gators and watches them whenever he can. Brad played various intramural sports throughout college and graduate school, and since arriving at Tech he has captained an intramural softball team made up of faculty and students from the College of Engineering and Science. Brad also plays in the regular lunchtime faculty pickup basketball game on campus, and commented, “While playing basketball, I’ve met and befriended a lot of people from other departments that I probably wouldn’t have met otherwise. Jamie has gotten me into running, so we often run the trails at Lincoln Parish Park with friends and have even run some races in other countries when traveling on vacation.”