Home › Weekly Update › From Monroe to Lake Borgne: a week with alumni and friends

From Monroe to Lake Borgne: a week with alumni and friends 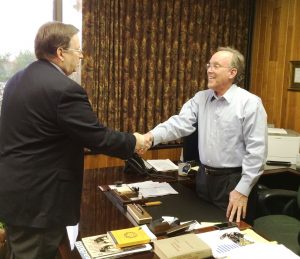 I was on the road again this week. On Monday, Ryan Richard and I headed to West Monroe and visited with Mayor and Tech alumnus Dave Norris. He and many members of his family have been loyal alumni of Tech, including his son Davy who is now Tech’s Chief Innovation Officer. Mayor Norris’ efforts in building West Monroe’s economy over the past several decades serves as a tremendous model for leadership. I also stopped by to visit Monroe Mayor Jamie Mayo. Mayor Mayo and I were actually teammates at Bastrop High, so it was good to have some time to reflect on those days with him. As the major metropolitan area for northeast Louisiana and the major city closest to Ruston, the city of Monroe is important for Tech as a transportation, medical, retail and employment hub as well as a major source for future Tech students. It is important that we all work together to advance this region of the state.

CenturyLink CEO and Tech alumnus Glen Post welcomed us to his office for a visit, and I was proud to present him with a Presidential medallion. Glen’s leadership in building CenturyLink into the nation’s third largest telecommunication company has been a remarkable achievement. We are most grateful to him for his commitment to build that enterprise in Monroe, creating greater job opportunities and economic prosperity for North Louisiana. CenturyLink has been a great partner for Louisiana Tech and we have been pleased to work with them in various academic, research, innovation, community development, and education initiatives. Several other companies have moved into Monroe and Ruston because of CenturyLink’s growth, and we expect to see those kinds of activities to increase over the coming months and years. 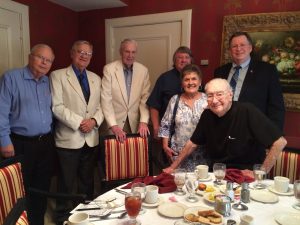 Meeting with alumni in Monroe

Ryan and I wrapped up our Monroe visit with a luncheon at the Lotus Club in downtown Monroe scheduled by good friend and one of our most dedicated alumni Dr. Guthrie Jarrell. I thoroughly enjoyed the time spent with these alumni who have been so loyal and committed to Louisiana Tech for many years. I appreciated their comments and perspectives about our activities and plans for the future. On Tuesday, I headed to New Orleans to chair a meeting of the Louisiana Innovation Council. We decided to move the LIC out of Baton Rouge for the first time to give Council members better insights into the entrepreneurship and innovation activities in various parts of the state. Our meeting was held at Propeller, an incubator focused on supporting social and environmental start-ups in the NOLA area since Katrina. We invited several companies to participate on a panel to discuss entrepreneurship challenges and opportunities in Louisiana. The meeting was quite successful. I took advantage of my time in NOLA to visit with several friends and alumni of Tech including Dr. Agnes Miller, professor emeritus and former Dean of the College of Human Ecology. Dr. Miller keeps a close eye on the happenings of the institution, and she was quite keen on telling me how to run the university. I loved my visit with her and gained a wealth of information on Tech’s history. I can not wait to go back to see her. 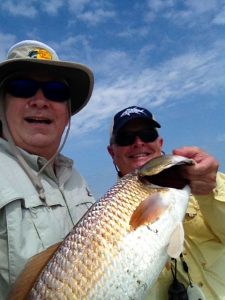 One bull red and two fishermen

After my visits, I decided to take one of my good friends and a former Tech classmate up on an offer to go fishing in the marshes around Lake Pontchartrain and Lake Borgne. I enjoyed the break from my routine and thoroughly enjoyed the trip. One highlight of our trip was when I “recaught” a bull red fish that had been previously snagged, but was lost when the fishing line broke. After trolling around a while, we noticed the cork floating nearby. I used a treble hook to snag the line below the cork, and hung on for the fight until finally pulling the fish into the boat. Both of us celebrated in the victory. 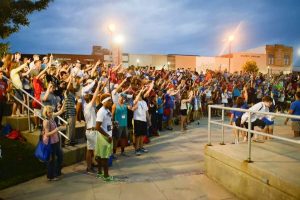 On Thursday, we had our final general orientation session on campus, which at 600 students was the largest ever held at Tech. There will be a final one-day late orientation make-up session next week, but we have already had a very successful summer in bringing new students to campus. The feedback that we have received from students and parents has been most positive, and I deeply appreciate all of the hard work of the Tech faculty and staff who contributed to making these sessions informative and inspiring. I returned back to Bastrop on Friday to visit with my mother, brother and family. We are helping prepare for Mom move into the house with my brother so she can have better care. As you can imagine, it is difficult to move after living in her house for almost fifty years.