Richmond Mancil earned his Ph.D. in special education with an emphasis on autism and applied behavior analysis from the University of Florida in 2007 where he gained clinical experience working with individuals with such complex issues as self-injurious behavior, rumination and sleep disorders. He has over 16 years of experience in working with individuals with Autism Spectrum Disorders, cognitive disabilities, and psychiatric disorder, and is a doctoral level board certified behavior analyst and a licensed behavior analyst in the state of Louisiana. Prior to arriving at Louisiana Tech, he was the executive director of the Kentucky Autism Training Center at the University of Louisville. Prior to this, he also served on the faculty at the University of Central Florida and Western Kentucky University, where he was the assistant director of the Kelly Autism Program. He serves on the editorial board of several journals including Focus on Autism and Other Developmental Disabilities and Beyond Behavior, and is on the Board of the Louisiana Behavior Analysis Association. 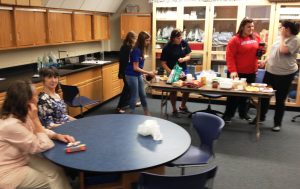 At Louisiana Tech, Rich is the special education coordinator in the Department of Curriculum, Instruction, and Leadership within the College of Education. His current research focus has been the application of behavioral economics for both children with disabilities and staff who work with them. In addition, Rich is interested in the application of telemedicine within the field of applied behavior analysis as well as the use of various other technologies such as ‘bug in the ear’. I have been pleased to see Rich reaching out to faculty and staff in other departments at Tech who have similar interests in autism or other disorders in children. This has included faculty in biomedical engineering, behavioral sciences, computer science (analytics), speech and audiology. 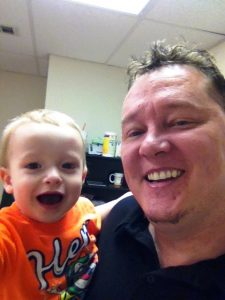 One of the young children with whom Rich has been working

Rich also collaborates with a clinic in Ruston that works with young children with autism and other disabilities. Rich noted, “This allows my students, both under and upper classman, to get hands-on experience working with children with disabilities and first-hand experience that all children can learn, regardless of what disorder they may have. Prior to the experience, they are taught through video modeling and role-play. In addition, I utilize guided notes in my courses, which is an evidence based practice that has been shown to increase material retention and on task behaviors during college courses. Through this, I have reached out and conducted free parent training workshops quarterly. My goal is to help spread the use of applied behavior analysis in northern Louisiana so that every child with autism or other disabilities may have access to the therapy he or she needs.” 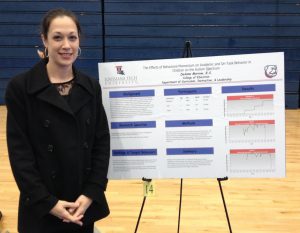