Daniela with a few of her student team members

Since joining Louisiana Tech in September 2003, Daniela has enjoyed teaching and has continuously worked on improving her teaching skills which has contributed to Louisiana Tech’s collaborative environment for enhancing the quality of our students. She has been able to create unique opportunities to challenge her students, not only through her interdisciplinary education and her multicultural environment exposure, but also by way of her education and professional preparation in both the experimental and theoretical aspects of science and engineering. Daniela views teaching as a way to not only convey knowledge, but also as an opportunity to make a positive difference with students, by awakening their curiosity and sparking their interests in research. She has made a fervent effort in attracting and encouraging undergraduate students to become involved in research projects. Thirteen undergraduate students have worked in her research laboratory over the years and she has also been very successful in attracting and retaining graduate students and leading them to timely graduation. Daniela has graduated a total of six Ph.D. and nine M.S. students. Her seventh Ph.D. graduate is scheduled to complete studies this summer.

Daniela has participated in the training and professional development of K-12 science and math teachers and developed research-based educational materials through partnerships with K-12 teachers. She has been involved in K-12 student education through the NSF-supported “Continuing GK-12, Creating Connections: Advancing Knowledge, Learning and Stem Career Opportunities for Rural Louisiana” and the NASA-supported “Idea Place and Summer Science Institute and LA GEAR UP Partnership” programs at Louisiana Tech. A peer-reviewed article Daniela led was published in Chemical Engineering Education involving a high school teacher and a GK-12 teaching fellow. Daniela has participated in the design of hands-on learning activities and has taught science activities as part of the NASA’s Summer of Innovation program. She has organized and presented at K-12 teacher workshops and delivered talks to teachers as part of the Northern Louisiana Regional Collaborative for Excellence in Science and Mathematics Teaching program she leads at Louisiana Tech together with her partner and husband Dr. Pedro Derosa (Project Director and Lead for Grambling State University). Daniela was appointed Program Chair of Chemical Engineering in Fall 2011 and, while making service contributions to the University, she has made a steady effort to contribute to the profession and community as a whole. She has been an active member of the American Institute of Chemical Engineers (AIChE) since 1999 and became an AIChE senior member in 2010. She has been the Chair and Co-Chair for several AIChE Spring and National meetings, a Director (2009-2011) and Topical Chair (2010) of the AIChE-TEP Division, the 2010 Spring AIChE Meeting TEP Division sessions organizer, and an Advisory Board Member of the AIChE Center for Energy Initiatives. In 2012, Daniela was publically nominated and elected Chair of the AIChE Transport and Energy Processes Division. During Daniela’s leadership, a formal sponsor, the Tubular Exchanger Manufacturers Association, was found for the prestigious international Donald K. Kern Award which is the TEP Division’s annual.  A TEP website with updated information on the division’s latest activities and upcoming events was created under Daniela’s leadership as was the very first TEP newsletter. In May 2013, Daniela was honored to receive an American Institute of Chemical Engineers (AIChE) Excellence and Service Award. 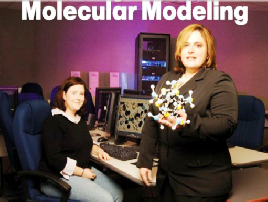 Daniela in her computational modeling lab

Daniela has also established clear evidence of a nationally and internationally respected scholarly career.  She has received significant honors and awards such as the very prestigious NSF-CAREER AWARD in 2005, making her the first woman in the history of Louisiana Tech who ever received such a significant award. Daniela has also received an Outstanding Research Award in 2009 from the College of Engineering and Science and a Publication Award in 2011 from the Institute for Micromanufacturing, among others. Daniela has a consistent record of high quality scholarly peer-reviewed publications and has published a total of 22 peer-reviewed articles, 41 conference papers, and six book chapters. Since Fall 2003, she has presented over 23 papers at international conferences with participation from undergraduate and graduate students. Over her years at Louisiana Tech, she has been involved in the submission of 65 proposals either as PI, Co-PI, subcontractor or senior investigator of which 27 were funded resulting in over $23.3M. Specifically, Daniela has received significant funding as the leading principal investigator ($1.4M) generated from collaborative national and international efforts with researchers in the same or other fields ($2.3M), and resulting in a total of $3.7M directly associated to her specific efforts since she joined Louisiana Tech.

Having dinner with workshop participants

In October 2012, Daniela was awarded a contract with North Carolina A&T University as part of their NSF-CREST Bioenergy Center grant, and became the Louisiana Tech principal investigator and only external subcontractor for this Center. Daniela has been actively involved in the organization of the “Indo-US Workshop: Emerging Issues in Energy and Environment Security: Challenges and Research Opportunities”, that took place on December 12-15, 2010 at The Claridges SurajKund, Delhi NCR India, as part of an NSF grant she has received. This workshop was sponsored by the NSF, the Indo-US Science Technology Forum, the Department of Science & Technology – Govt. of India, the Indian Institute of Technology – Delhi India, and the Ministry of New and Renewable Energy – Govt. of India. The workshop was attended by 28 chemical engineers – 14 from the U.S. and 14 from India. In Nov 2012, Daniela was contacted by the OMICS Group, the World Class Open Access Publishing Group and Scientific Event organizer, and invited to be an Organizing Committee Member for Petrochemistry-2013, the “World Congress on Petrochemistry and Chemical Engineering”, that took place on Nov 18-20, 2013 in San Antonio, TX. 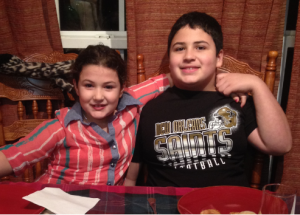 Apart from having a successful academic and research career, Daniela is the mother of two smart and beautiful children, Nicholas Daniel (12) and Camila Nicole (8), and is married to Pedro Derosa, Associate Professor of Physics at Louisiana Tech, who holds a joint faculty appointment with Grambling State University. Nicholas and Camila go to A.E. Phillips Laboratory School and will be in the seventh and fourth grades respectively, this August. Nicholas is in the Gifted and Talented program at AEP and is a Boy Scout. Camila is a level-3 gymnast and a Junior Girl Scout. Daniela enjoys organizing trips and traveling with her family.