Home › Weekly Update › Welcoming many to the Tech Family this week

Welcoming many to the Tech Family this week

I welcomed Ryan Richard to my staff this week as Coordinator of Programs and Development. Ryan replaces Reggie Hanchey who had worked with me for the past year as well as the two presidents preceding me. Reggie retired at the end of May after 40 years of dedicated service. Ryan previously served as Director of Alumni Relations with the Division of University Advancement. He has done an outstanding job in that position, is well-known and liked by our alumni, faculty, staff and students, and will continue to work with our alumni and others as I extend my own efforts more deeply into development.  He will also coordinate many events and activities on campus. Ryan and his wife Kathleen have two sons, Trenton and Jacob. They are all loyal Tech supporters and I am thrilled to have Ryan working with me and my staff. Much of this week has been focused on staffing and preliminary budget planning as we await word on final budget numbers from Baton Rouge. On Wednesday, I had a visit from Professor Guillermo Badenes, the Secretary for International affairs of the National University of Cordoba in Argentina. We signed a Cooperative Agreement that will enable greater cooperation and establish relationships to promote the development of education, training and research in areas that are common to both universities. The University of Cordoda is celebrating its 401st birthday this year and has more than 100,000 students. 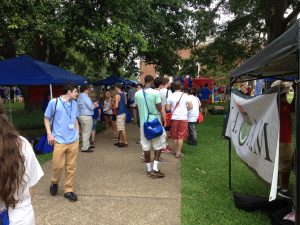 The latter part of the week was particularly exciting as we had hundreds of students and parents on campus for our first orientation session of the year.  This was Honors Orientation and was by far our largest ever honors orientation session at 370+ students. Students and parents were welcomed on Wednesday evening by Mayor Dan Hollingsworth and others in downtown Ruston, providing a great venue for families to become familiar with the city and to understand the important connections between Ruston and Tech. The downtown merchants were very accommodating and pleased to have the Wednesday evening traffic.  I had the opportunity to meet with many of the students and parents on Thursday, and was pleased to see so many students coming from out of state including some from Colorado, Maryland and Utah.  This is shaping up to be another outstanding freshman class for us.

On Thursday and Friday, our Athletics Council and I welcomed our new Head Baseball Coach, Greg Goff, and his family to campus.  Greg joins us after having built a highly successful program at Campbell University in North Carolina. He is coming off of three consecutive 40+ win seasons facing some very tough competition. Athletics Director Tommy McClelland formally introduced Coach Goff at a 9:30 AM press conference on Friday.  More information about Greg and the announcement can be found at the following press release: http://www.latechsports.com/sports/m-basebl/spec-rel/060614aab.html