Dr. Pedro Derosa: The multidisciplinary side of physics 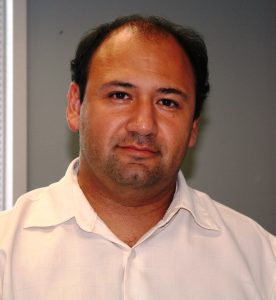 Pedro Derosa is an associate professor of Physics at Louisiana Tech and has a joint appointment with Grambling State University.  He was born and raised in Argentina where he earned his ‘licenciado’ in Physics (equivalent to a bachelors plus a masters) and his PhD in Physics. He came to Louisiana Tech in 2003 from the University of South Carolina where he was a postdoc, first in the Department of Chemical Engineering, then with another group in Chemistry and Biochemistry and finally in Electrical Engineering. After this unusual path, Pedro found interdisciplinary work so natural that he no longer feels comfortable staying within the confines of a single discipline. Pedro said, “I realize that the Tech environment, particularly in the College of Engineering and Science, is a perfect match for me. A story I like to share, and with pride I must add, is how it took me a few months to figure out the home department of the faculty in neighbor offices in the Institute for Micromanufacturing, as I found the multidisciplinary environment fascinating and full of opportunities.” Pedro loves teaching and is excellent at working with students.  That probably comes from his parents since his mother tutors for a living in Argentina and his father retired as a chemist at the same time that he also held a part-time teaching position at the National University of Córboba in Argentina. Pedro noted, “I guess it is in the genes. I have been teaching since I was in high school when I helped in the tutoring company and have continued teaching since then. In class I feel strongly about the benefits of interactions among students, and as such, most of my homework includes group activities. I like to complement my classes with simple experiments, video demonstrations, and even programing activities. I feel that although the traditional teaching style is instilled in me and it is hard to move away from, every effort has to be made to do it differently.  We are teaching a generation that thinks, acts, and has access to resources we could have not even dreamed of when we were in school.  Thus, something has to change. I get up every morning with that idea in my head and spend long hours trying to get there.” 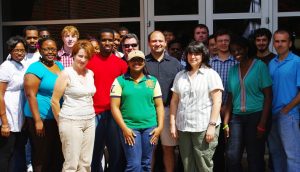 Pedro’s joint position with GSU was originally funded through the National Science Foundation, and Pedro has proven this to be a great success.  He noted, “It is my job to take advantage of the strength of each University and to magnify the impact of both. One of the programs for which I am most proud is the ‘JFAP Summer Outreach Program.’ The program was instituted in 2005 and has continuously operated since then. Initially with support from the Board of Regents and later with support from the U.S. Air Force, the program has served 46 students from both campuses. This program has given the opportunity for undergraduate students to interact with graduate students and to have hands-on experiences in research.  Fostering collaborations between students at both institutions is an added bonus.” Pedro’s research interests are in the general area of computational materials science, particularly nanocomposites and conductive polymers. He is a part of two big research collaboratives, one funded by NSF and the other funded by the Air Force Research Lab through the Minority Leaders Program (MLP) and the Research Collaboration Program.

Pedro’s participation in the MLP has been very important in the early years of his career as a faculty and it has helped him grow as a researcher.  “I had the honor to serve as a co-leader of the multiscale modeling team where I met a great group of people that mentored me during my track towards tenure. It gave me the courage to be the lead editor for the book “Multiscale Modeling: From atoms to Devices”. I have maintained continued support from Air Force since 2007 and impacted a large number of students in the process. Last summer I visited the AFRL in Dayton, Ohio with 9 students, including summer interns, which was probably the largest number of student from a single research group they have seen.” Pedro is also a major contributor to the Louisiana Alliance of Simulation Guided Materials Applications (LA-SiGMA), a $20M NSF-funded research collaborative. It is the largest of its kind in Louisiana’s history, with almost 60 faculty statewide being part of the project. Last year, Pedro was invited to be part of the 6-member Reverse Site Visit team that travelled to NSF to defend the project to a highly-respected group of national scientists.

Participants in the Regional Collaborative

He also participates in various outreach projects. He co-chairs the External Engagement and Workforce Development team of LA-SiGMA and is the program director for the Louisiana Tech/Grambling Regional Collaborative for Excellence in Science and Mathematics Teaching. This program is supported by Shell Corporation and is an extension of Shell’s Texas Regional Collaborative. The purpose of this project is to provide professional development to elementary, middle, and high school teachers to empower them to be leaders and mentors to other teachers. Pedro serves as the Grambling campus PI while his wife, Daniela Mainardi, is the campus PI for Louisiana Tech. 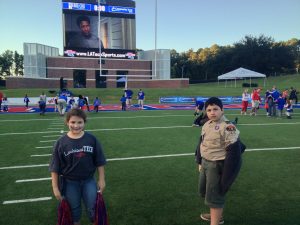 Pedro and Daniela have a son Nicholas and a daughter Camila, and both are students in the 6th and 3th grade at the AE Phillips Laboratory School. Daniela is a faculty in Chemical Engineering and serves as its program chair. Nicholas, a 6th grader, is in his first year as a boy scout and Camila, a 3rd grader, is on the competitive team at CC’s Gymnastics.