Greg Lyons grew up in Poplar Bluff, Missouri, a rural town near the state’s southeast corner known regionally as the Bootheel. Greg noted, “It was just as exciting as it sounds…  But, I had awesome parents and awesome teachers that inspired me to learn.” Greg earned the Bachelor of Music Education degree from the Wheaton College Conservatory of Music in Wheaton, Illinois. Then he moved near what is regionally referred to as the Middle of the Mitten to attend Central Michigan University where he earned a Master of Music degree in percussion performance. 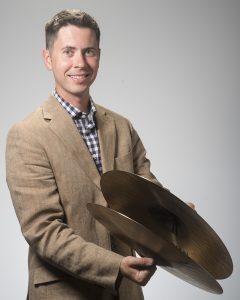 Greg then moved to southwest Missouri where he started his career as a music educator. He began team teaching with three other band directors. Greg said, “It was the perfect first job, because it gave me an opportunity to learn some of the proverbial ropes alongside seasoned colleagues, who were also incredibly talented, knowledgeable and supportive. One particular highlight involved taking the entire band to Pasadena, CA to march in the Rose Bowl Parade. Not even the 5 inches of rain that poured continuously throughout the five-mile route could keep us from smiling at the end as we engulfed our In-n-Out Burgers.” After three years of teaching, Greg decided to pursue further graduate study out of a dual desire to increase his knowledge and skills as a performer and to teach percussion at the collegiate level. He attended The Ohio State University where he earned the Doctor of Musical Arts degree in percussion performance.

Greg began teaching at Tech in 2009. His duties include teaching applied percussion to the university’s percussion majors, directing the Percussion Ensemble, assisting the Director of Bands as the drum line instructor, and serving as the Head of Instrumental Music Education. Greg also teaches private percussion lessons, percussion methods, secondary instrumental methods, and introduction to non-western music. Greg said, “This summer, I’m excited to teach music appreciation as part of the Bridge to Bulldogs program.” 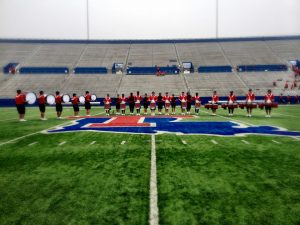 Greg has seen the drum line triple in size since 2010, which can be credited to the excellent high school band directors in our region as well as the talented and hard working students who choose to attend Tech. Recently, Greg formed a percussion duo with Dr. Darin Olson,Assistant Director of Bands at the University of Wisconsin-Madison. “Last year we performed multiple recitals in Louisiana, Texas and Oklahoma and are currently scheduling additional performances for the coming year. We also collaborated with a Design Artist at DreamWorks Animation in order to create a real-time 3d visualization that accompanies our performance. We aim to record a live version of the music with the video this summer.”  Check out a preview of Greg and Darin Olson playing a percussion duo.  https://www.youtube.com/watch?v=sq1Ohdh9Oww

Greg serves as the President of the Louisiana Chapter of the Percussive Arts Society and is a proud endorser of Vic Firth Sticks and Mallets, Grover Pro Percussion, and SABIAN cymbals. He also serves on the board of the Percussive Arts Institute of Ruston, which just this year began offering free community music instruction in their downtown studio/gallery. “Because percussion is an entire instrumental family, there is much for my students to learn in their brief time as undergraduates. I like to utilize technology and music apps frequently. Bulky $100 metronomes that I relied on a few years ago are now just one free click away in the App Store. And with the rapid change of course content delivery, I am aspiring to stay current with the most effective music teaching tools. I had a student give a presentation last year on ‘The Best Music Apps for Music Students.’ Several of the ones he researched were completely new to me, and were incredibly useful, so I now incorporate them into my own personal practice as well as my teaching.”