On May 8, Dr. Joe Pullis was recognized by his colleagues with the College of Business Lifetime Achievement Award. Those of us who have known and worked with him, can testify to how truly deserving Joe is in receiving this award. Joe is a most highly respected faculty member and a great professor. He has devoted his life to serving Louisiana Tech and has many positive impacts during his 47 years of service.  One of Joe’s sons, Robert, was invited to introduce his Dad at the College awards event on May 8.  Robert’s remarks were appropriately reflective, touching, and slightly irreverent as only a loving son could do. Robert allowed me to share the introduction below. But first, some real facts about Joe:  Joe Pullis is a native of Texas and a graduate of the University of North Texas in Denton. He has been a professor of business communication at Louisiana Tech University since 1967. In 1957, ten years prior to joining Louisiana Tech University, Joe was the National Drumming Champion of the United States and was featured soloist with the Lawrence Welk Television Orchestra, the Dallas Symphony Orchestra, and the St. Louis Pops Orchestra. While at Louisiana Tech, Joe has been the recipient of the University’s most prestigious recognitions including the Faculty Senate Chair Award, the Alumni Professorship Award, and the Scholar of the Year Award. Joe has authored 13 textbooks with McGraw-Hill Book Company, has published over 80 articles in refereed journals, and is the inventor and author of Speedwriting, the world’s most widely used shorthand system. He has also been the invited speaker at over 100 colleges and universities throughout the United States and Canada. Joe and his wife Cheryl have two sons, both of whom are graduates of Louisiana Tech University. Joe retired from Louisiana Tech on February 28, 2014 but continues to serve and support the institution in many ways. Robert’s introduction of his father: Two or three weeks ago, Dean Lumpkin asked me if I would introduce someone whom all of you already know – my Dad. I agreed to do this, thinking it would be a fairly easy assignment, until Dean Lumpkin said, “Tell us something we didn’t already know about your Dad. For example, we don’t need to hear the boring stuff about his 13 textbooks with McGraw-Hill Publishing Company or his 78 refereed journal articles published while he has been at Louisiana Tech. We only want to hear the sexy stuff about your Dad.” Well, that just made a fairly easy assignment literally impossible – as all of you here know, there is absolutely nothing sexy about my Dad. In fact, a family mystery for years has been how in the world my Dad got my Mom to agree to marry him. That remains a mystery to this day. My Dad has four college diplomas from the same school, but all with a different school name – North Texas State Teachers College, North Texas State College, North Texas State University, and the University of North Texas. Apparently, it took my Dad an awfully long time to get through college. Interestingly, he majored in business education while in college but attended college on a full music scholarship – the only person to this day at the University of North Texas to be given a full music scholarship who was not a music major. Dad’s roommate in college was the brother of a rather famous golfer at that time by the name of Ben Hogan. 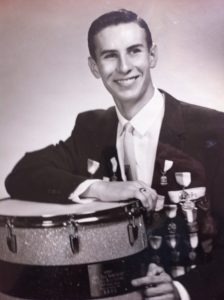 Dad was twice state drumming champion of Arkansas, six times state drumming champion of Texas, and eventually the national drumming champion of the United States. He has performed with the Dallas Symphony Orchestra, the St. Louis Summer Pops Orchestra, the Lawrence Welk Television Orchestra, and the Harry James Orchestra. Apparently, he was not good enough to stay with any one orchestra for very long! In high school, Dad was a second-stringer on the Nocona, Texas, basketball team and was knocked out – literally – in the regional finals by Don Meredith from Mt. Pleasant. You may recall that Meredith was the quarterback for SMU and the Dallas Cowboys and was for several years the Monday night commentator for NFL football. Apparently, my Dad, on the other hand, has never yet fully recovered from being knocked out! He was also on his high school track and field team and was a reasonably respected high-hurdler in Texas. In track, I think his claim to fame was actually being defeated in the Texas Relays by a fellow Texan by the name of Bobby Joe Morrow. Dad finished 8th in – obviously – a field of 8 in the final heat of the Texas Relays. Dad’s hometown paper – the Nocona News – covered the event and reported it as follows: Bobby Morrow won the 100-yard dash in a time of 9.6 seconds; Dennis Richardson (a high school teammate of Dad’s) finished in second place in a time of 9.7 seconds; and Joe Pullis finished in eighth place in a time of – day after tomorrow! The reporter added a quip that Dad apparently thought the race was the 100-year dash rather than the 100-yard dash. Dad claims the reporter from the Nocona News never did really like him! I should mention that both Bobby Morrow and Dennis Richardson were U. S. Olympic Champions, and, in fact, Bobby Morrow won three gold medals in the 1956 Olympics in Melbourne, Australia, setting three world records at the time. Bobby Morrow was Sports Illustrated’s Man of the Year. And Dad was voted by his fellow track and field teammates as “Least Likely to Ever Win a Race.” To this day, Dad has – to the best of my knowledge – never won a race. But he did (somehow) win my Mom’s heart, which he says was the best win of all. Dad, sexy or not, winless or not, my brother Lance and I are both proud to call you Dad.