Dr. Dolliann Hurtig: A calling for service, a love for Tech 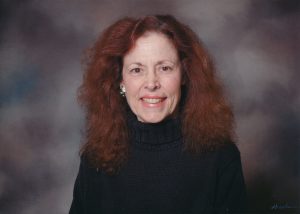 As a native New Orleanian, Dolliann Hurtig did not know that much about Louisiana Tech before accepting an assistant professor position twenty eight years ago. She noted, “I have discovered Tech to be much more than an Engineering School for which Tech is celebrated. Tech provides a first class education for our students and I am happy to promote the name of our university in whatever capacity I serve, in the local community, in the state and at the national level.” Dolliann earned a B.A. in French and English from Sophie Newcomb College, a M.A. in French and English from the University of Louisiana at Lafayette, and a Ph.D. in French and English from Tulane University. She is currently associate professor in the Louisiana Tech School of Literature and Language. Dolliann’s personal background entwines with her professional background. She knew that she was going to be a teacher since the age of twelve. Dolliann noted, “I had a convent upbringing, Ursuline Academy, the oldest school for girls in the country, founded in 1727. Girls are placed on the waiting list to attend Ursuline the moment they are born. The nuns instilled into all of us that we could be whatever we wanted to be, but above all, be courteous, be loyal, be courageous, and serve. SERVIAM is the motto of the Ursulines, great teaching nuns.” 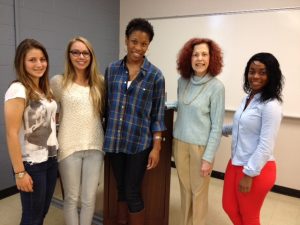 Dolliann’s classroom method is highly interactive as she often has the students sit in a semi-circle configuration where they write creative dialogues and act out their dialogues with props. Dolliann stated, “The upper-level students present for twenty minutes on culture, on civilization, on literature in the target language, making use of technology with PowerPoint and video-clips and You Tube on topics of interest such as French politics, the situation of women in France, Francophone writers, cuisine, social issues like that of immigration, France as secular society, Canada, the Francophone World, the European Union. As the Internet is a gold mine for teaching tools, I make daily use of the computer (l’ordi) in the classroom setting.” More recently, Dolliann has served as a mentor to Tech’s Fulbright teachers, has visited their classes, and provided feedback. Dolliann noted, “These teachers have added to our program by their good will, by participating fully in campus life, showing film after hours, tutoring, assuming the role of guest speakers in different classes, all the while teaching their own classes, participating in International Day and in the French Honor Society sponsored events. Their presence has served to enhance our French program.” 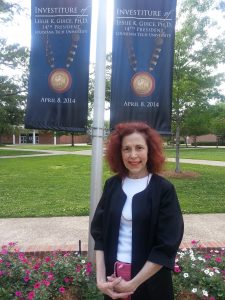 Dolliann has continued to build upon her calling and her commitment to service through extensive involvement in organizations at the university, state, and national levels. At the university level, Dolliann serves as Dual Enrollment Coordinator for French and through that experience gets to know several of the state’s high school teachers. She is the Pi Delta Phi National French Honor Society Moderator and is a member of the American Association of University Women that promotes university women and works for the success of women in Academe. At the state level, Dolliann has served as President of the Louisiana Foreign Language Teacher’s Association. She recently gave a joint presentation on Francophone cinema with Tech’s Fulbright teacher from Rennes, France. Dolliann also serves as the CODOFIL (Council of Development of French in Louisiana) representative from Louisiana Tech. She has served as Secretary and Vice-President of CODOFIL Consortium and has assisted our students in procuring scholarships and assistantships to French-speaking countries. At the national level, Dolliann has been involved with the American Association of Teachers of French (AATF). She just completed a three-year term as Commission Co-Chair for Promotion of French in the United States (Co-chair with Mme Joyce Beckwith, MAT, Harvard University). She is Editor-in-chief of a book on Francophone film in the French language. The book represents two and one-half years of work and is entitled “Allons au cinéma: Promoting French through Films.”

Because of this work, the organization has honored Dolliann with a new Commission appointment, the National Commission on Cinema. Dolliann will serve as Editor-in-chief and, along with co-Editor Joyce Beckwith, will produce Volume II of “Allons au cinéma: Promoting French through Films.” She has been named Chair of Hospitality for the National Convention of AATF to be held in New Orleans in July, 2014. While there, she will be presenting as Co-Chair of the National Commission on Cinema and giving a three-hour workshop with six colleagues to promote the newly published book. Dolliann has traveled around the US, Canada, and Europe for the past several years giving presentations in the French language in such places as New York City, Philadelphia, Boston, Baltimore, San Diego, Liège, Belgium, Montréal, Chicago, Shreveport, and Lafayette. 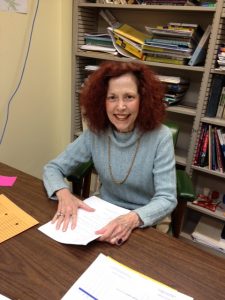 Closer to home, Dolliann has family members who have attended Tech.  Her father is a member of three of Tech’s Honor Societies and other family members have graduated from Tech in Engineering and in Nursing.  Dolliann is most proud and passionate about her association with Tech, “I have watched Tech grow to a Research I status and I have grown as a professional, as one who serves, who teaches, who engages in research, because of my association with Louisiana Tech University.  All in all, in the different capacities where I serve, on the local, on the state, on the national level where I am obliged to present at conferences twice yearly, I strive to promote the good name of Louisiana Tech University.” Four of Dolliann’s colleagues recently nominated her for the Palmes Académiques, the highest honor for a teacher/professor of French.  The process takes about one year for final approval as the nomination goes to France, to the Embassy, for final approval. The nomination itself is a great tribute to Dolliann and we are all wishing her the best for this prestigious recognition by her peers.