Tech's in the Big Easy and Red Stick Territory

Kathy and I drove down to New Orleans (actually Metairie) to participate in the “Tech’s in Town” event at the Heritage Grill.  We had a good turnout of alumni and friends.  AD Tommy McClelland and I were joined by new Lady Techsters Head Coach Tyler Summitt and Assistant Football Coach Jabbar Juluke who came to Tech from New Orleans and is very familiar with the area. Jabbar and Coach Joe Sloan have been most successful in recruiting this part of the state for the Bulldogs and we were pleased that Jabbar’s brother joined us at the Heritage Grill.  I appreciate Tyler making the trip as well.  He drove down to Metairie and then returned back to Ruston after the event so he could hit the recruiting trail.  I enjoyed renewing friendships with several of my former students and visiting with several other alumni and friends from the area. One of the attendees was Henry Stow, alumnus and father of current Tech student Zach Stow, who is the Tech Rugby Football Club President. I plan to go out to see Zach and his teammates play their final rugby game for the season on Saturday. On Tuesday, I had some meetings in Baton Rouge including a visit with Interim Commissioner of Higher Education, Tom Layzell.  Dr. Layzell has been quite helpful to Louisiana’s higher education community over the past few years as he as served in some major positions during transitions of leadership.  He has a tremendous wealth of knowledge and experience, and is also very effective in working across higher ed’s broad constituencies. He was serving as Interim President of the UL System when I was selected as Tech’s President. Tuesday afternoon, I went to the Capitol where we held our first Louisiana Innovation Council  since I was named as Chair. During that meeting, we featured some of the industry-university partnerships that are having such an economic impact across the state.  Senior representatives from LSU and IBM as well as UNO and GE Capital spoke about their partnerships.  Louisiana Tech VP Stan Napper and Matthew Cameron of CenturyLink spoke about our partnership which has been multi-faceted including several academic programs, research programs, and consortium activities that are having significant impacts on both organizations.

Tuesday evening, we had a “Tech’s in Town” event in Baton Rouge at Juban’s with a packed room of enthusiastic Tech supporters.  Coach Joe Sloan joined me and Tommy McClelland as speakers.  I was pleased to recognize legendary Tech Coach Jimmy Mize and his wife Minnie with Presidential Medallions at the event.  Coach Mize has a 1938 brick along alumni walkway and since his graduation nearly eight decades ago, has had a tremendous impact on so many people at Louisiana Tech and across the nation. I was also pleased to recognize three students from Catholic High in Baton Rouge who attended the event and let us all know that they were going to be Bulldogs in the Fall of 2014.  There were many former students, colleagues, and special friends that showed up at the event to catch up on the latest happenings at Tech. 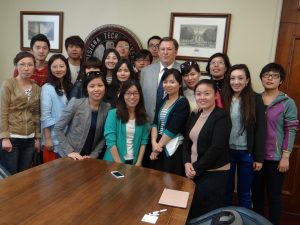 It was good to be back in the office the last two days of the week to catch up on some paperwork and have meetings with my administrative team and others. I was pleased to welcome 18 Chinese educational representatives from student advising companies in Beijing, Shanghai, Guangzhou, and Chengdu.  They stopped in Ruston on Thursday to look at the campus and will be visiting eight other campuses over a two-week period. I appreciate the tremendous work done by Dan Erickson, our Director of International Student and Scholar Services, who plays such an important role in supporting our international students. International students are a vital part of our student body and enrich the learning experiences for all of our students on campus. On Friday, we welcomed the Northeast Chapter of the Society of Louisiana Certified Public Accountants to Tech.  We were appreciative that the Chapter presented scholarships to two of our students.  The featured speaker for the event was Vance McAllister, 5th District U.S. Congressman, who gave a Washington update.