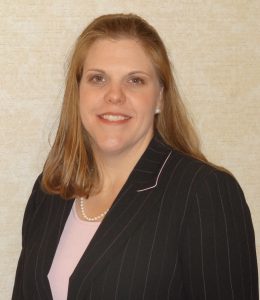 Melinda Bryan was born and raised as the oldest of four children in West Memphis, Arkansas. Her mother would tell you that Mindy has always been a mom, taking care of her brothers and sisters as if they were her children. Mindy said, “I vividly remember setting an alarm in 1985 (when I was only six years old), so that I could wake before my parents – to wake my newborn sister to feed her on Saturday mornings. Now as a parent, I might understand why my parents wanted to be up when their baby (my sister, Allison) and their six year old (me) were up alone.” By the time Mindy entered College, she was ready for a change. She headed to Conway to attend the University of Central Arkansas where she pursued a Speech-Pathology major a Mathematics minor. Mindy seemed happy with that decision until the Fall of her senior year, when she was given a speech therapy client of her own. That is when it became very clear that speech pathology was not for her. She began talking to professors about career options with a speech pathology undergraduate degree. She met Dr. Donna Fisher-Smiley, an audiologist who had recently graduated with her Ph.D. from the University of Tennessee in Knoxville. She also signed up to complete an undergraduate research project under the direction of Dr. Smiley. Mindy noted, “I began this project entitled Acceptance of Background Noise in Children with Normal Hearing in the Fall 2000 and completed data collection and manuscript write-up in the Spring 2001. In 2006, the manuscript came out for publication in the Educational Journal of Audiology. At the time, I had no idea that I would obtain my Ph.D.; however, I remember thoroughly enjoying learning about the research process.” In the Spring 2001, Mindy graduated with honors from the University of Central Arkansas and headed to Graduate School for Audiology at the University of Tennessee in the Fall 2001. For the next two years, Mindy learned everything she could about clinical audiology, research, and Tennessee football. She worked under the direction of Dr. Anna Nabelek, a research professor (originally from Poland) with a background in Acoustics. At the time, she was working on an NIH grant and chose Mindy as one of her research assistants. Mindy helped her in the development of research projects, wrote grants, recruited participants, collected data (on 191 research subjects in about 2 years), and wrote manuscripts.  She began to realize the importance and enjoyment research could provide. She also secured funding from NIH in the form of a Predoctoral Fellowship Award, which supported her throughout some of my Master’s degree and all of her Doctoral degree. In the Spring 2003, Mindy graduated with a MA in Audiology and a concentration in Aural Habilitation/Rehabilitation. She then completed a year and a half of a part-time clinical fellowship so that she could work as a clinical audiologist, should that be her choice. While working clinically, she also began her Ph.D. in Speech and Hearing Science from the University of Tennessee.  She completed the PhD in August 2006, and at that time, Mindy had already published seven research articles and secured two NIH grants. 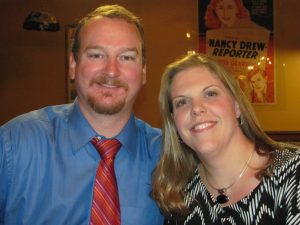 The same month Mindy earned her doctorate, she moved to Ruston and began working as an Assistant Professor/ Audiologist in Louisiana Tech’s Department of Speech. Mindy said, “I have to admit when offered the job, it was an easy decision since my one true love (now my husband) also worked at Louisiana Tech in the Department of Speech. I met Dr. Matthew Bryan in graduate school. He graduated with a Doctor of Audiology (Au.D.) in the Spring 2005 and began at Louisiana Tech in the Fall 2005. I was thrilled there was another job opening in the Fall 2006. We got married in August 2008.” Since arriving at Tech, Mindy has contributed much to the Department of Speech and throughout the University. She has worked in all aspects of the Doctor of Audiology program including as a clinical supervisor, instructor, researcher, Extern and Residency Liaison, and Admissions Director. Currently, she is an Associate Professor and the Program Director for the Doctor of Audiology program. “As I see it, my job as the Program Director for the Doctor of Audiology program is to ensure that the AuD students are matriculating through the program at the appropriate pace. I follow each one of them from the time they are admitted to the Program through the completion of their graduation paperwork.” At the University level, Mindy has been a member of the University Research Council, where for the last two years, she has organized the Louisiana Tech Student Undergraduate/Graduate Research Symposium. She is also a member of the Workplace Policy Committee.

Mindy noted that the field of Audiology is a service profession, making it is easy to incorporate service learning experiences as almost everything can be translated to patient care. Therefore, after training students in classroom, Mindy often has those students complete laboratory exercises in order to solidify their knowledge in the area. She also consistently seeks out experiences in the community that will help students integrate classroom knowledge with clinical behaviors. One such example of this is having students develop and implement an aural rehabilitation program in an area nursing home after taking the aural rehabilitation course in their 1st year of graduate study. Mindy has also begun recording a few lectures that she would normally give in the classroom in order to have more hands-on, laboratory experiences with the students when she has them in the classroom. Mindy’s current research agenda is diverse and includes experiments in the efficacy of hearing aids and assistive listening devices, research in acceptable noise level, and hearing protector device performance. Some of her most interesting projects include (1) experiments investigating the installation and performance of soundfield amplification in portable, relocatable classrooms; (2) the investigation of the performance of hearing protector devices when earmold impressions are taken by novice impression takers versus trained, professional impression takers (i.e., audiologists); and (3) the effectiveness of hearing aid features in current products on the market today. Mindy has been highly successful in her professional pursuits including securing 15 grants (totaling $174,580), 15 publications, and 52 presentations at state, national, and international conferences. She has also directed 17 dissertations and participated as a research committee member on ten additional dissertations since beginning at Tech in 2006.

Matthew and Mindy started a family in 2010. They have two daughters, Hannah-Claire born in April 2010 and Brooklynn born in July 2011…they are 15 months apart in age. Mindy loves spending her free time with them and Matt, going to the park, reading, watching movies, etc. They also all enjoy attending Tech sporting events together, especially basketball games. Mindy has begun running again. In early November 2013, she finished her first half marathon. She also loves reading Nicholas Sparks novels – when not reading audiology textbooks. 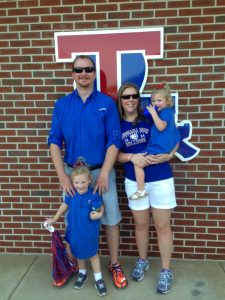 When asked what she enjoys most about her job, Mindy replied, “There are so many things. I LOVE teaching, whether it be in the classroom, clinic, or through the development and implementation of research. I love getting to know the students. With only five faculty and 20 AuD students, everyone knows everyone VERY well. I also love the administrative side of my job. Being Program Director allows me to do some administrative work while also teaching and being involved in research. I absolutely love going to work every morning, which makes me happy to get out of bed and head to work.” We are very happy the Mindy has made her home at Tech!