A week to remember 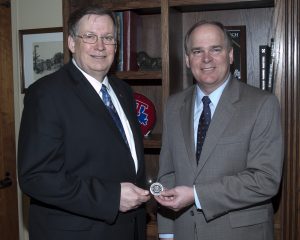 This week was full and exciting for me. On Monday, I had a visit from American Electric Power CEO, President, and Tech electrical engineering alumnus Nick Akins. Joining Nick were Venita McCellon-Allen, AEP SWEPCO president and chief operating officer-Shreveport, and several other corporate executives. Nick brought with him a $500,000 check from the AEP Foundation for the new Integrated Engineering and Science Education building. He also spent some time meeting with our administration and staff and took a tour through campus. We are most grateful for the tremendous support that AEP has provided to Tech over the years. I was pleased to present Nick with a Presidential Medallion recognizing his commitment to Louisiana Tech. On Monday, I also met with AD Tommy McClelland, VP for R&D Stan Napper, Executive Director of University Communications Dave Guerin to discuss various activities that were coming up for the week. Two of my favorite meetings of the day were with a prospective student and a photo op with Miss Tech Megan Lee in the Quad.  All in a day’s work.

On Tuesday, I met with some students who were appealing disciplinary actions.  I also met with the Athletics Council to consider a new head women’s basketball coach (more on that later), interviewed a prospective dean for engineering and science, met with the entity responsible for financing our new athletics facility, met with the head of our architecture program, and met with the Director of a local Technical College.  The highlight of the day was a visit with the Leadership Louisiana Tech class of student leaders.  Joining me for discussions with the students were Kyle McDonald, CEO of Argent Financial Group, and Tom O’Neal, President of O’Neal Gas. The class challenged us with excellent questions on leadership ethics. Will Dearmon has done an outstanding job in organizing and conducting the Leadership Louisiana Tech program. On Wednesday, I met with members of our Emergency Response Team to discuss shelters for potential federal emergencies. I also met with VP Corre Stegall to discuss plans for upcoming investiture and alumni events, met with a Tech Talk reporter, had a conference call with Louisiana Innovation Council staff, and hosted the awards reception for winners of our Undergraduate and Graduate Student Research Symposium. 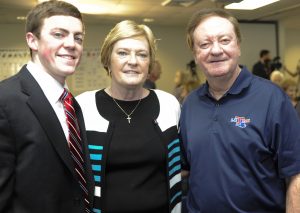 The major event for Wednesday was a press conference naming Tyler Summitt as Head Coach for the Lady Techsters basketball program. Tyler joins us from Marquette University where he served as an assistant coach. Tyler demonstrated his readiness for the head coach position by knocking it out of the park at the press conference. With standing room only in the Jarrell Room, Tyler commanded the stage, answering questions with the maturity and confidence earned by his intimate involvement in a championship program at the University of Tennessee.  Tyler also announced his associate head coach, Mickie DeMoss, a former Lady Techster and former assistant coach for Tennessee.  The press conference was made most special for all of us by the presence of Pat Summitt and Leon Barmore, two of the most successful coaches ever in women’s basketball. The press conference can be viewed at http://www.latechsports.com/allaccess/?media=443237. On Thursday, we finalized a most well deserved contract extension with head basketball coach Mike White, who has demonstrated tremendous leadership and class.  With a 29-8 record, Conference USA Championship, and NIT Quarterfinal appearance, Mike has demonstrated that he is taking Tech’s basketball program to national prominence.  I commend AD Tommy McClelland for his exceptional leadership in building our athletics programs the right way.

On Thursday, I also hosted a campus visit for two of our Board of Regents members. It is always good to get these key decision makers to visit with us to see first-hand what we are doing.  Thursday afternoon, we had a meeting of our Administrative and Planning Council and a meeting with the architects and contractors for our new athletics facility. Late afternoon, I was honored to be a presenter/panelist at the University Senate’s Forum on “The Future of Ruston: Retaining Excellence.” Also on the panel were Ruston Mayor Dan Hollingsworth, Economic Development Administrator Kristi Lumpkin, Chamber of Commerce Director Judy Copeland, and Vice President Jim King. Things did not slow down on Friday. All in all, this was one of the best weeks that I have had since becoming President. I am grateful for all of those who have been so supportive of Louisiana Tech, and for my leadership team and staff who have been working so hard to elevate Tech in prominence and in value to the community and nation.