Rhonda Syler has always had diverse interests and loves to learn, explore, and travel. Rhonda attended Middle Tennessee State University where she found a passion for organizations, people and leadership. She was a member of the French Horn Ensemble, operations manager of the campus television station, VP and co-founder of the broadcast student organization, and member of the founding board of directors of the National Association of College Broadcasters. After earning her BS in Mass Communications, Rhonda went to work for the Department of the Army in Wurzburg, Germany, as a staff writer.  She found herself quickly carrying a lot of responsibility, impressing a lot of brass, and moving her way up to a civilian Command Information Officer and then a Public Affairs Officer, managing a regional office and 4 sub-regional offices during the days of base closures and Operation Desert Storm. Rhonda said, “It was a fascinating time full of experiences – dealing with crisis situations, briefing generals, entertaining German political leaders, flying in helicopters, dealing with wartime situations and being involved in the community – experiences that have shaped who I am today.” Then, Rhonda decided to further her education and entered graduate school at Kansas State University where she earned an MS in public relations/organizational communication.  Rhonda observed, “Again, I found myself gravitating toward organizational studies, because people fascinate me. Although I was an early adopter of technology and a geek at heart (my dad is an aeronautical engineer – worked for Boeing during the Apollo days – so I get it honestly), I had not yet found my passion for technology, but I had found my passion for academia and teaching and started to devise a path toward one day pursuing my PhD.”

Rhonda was hired to form a public affairs office for the U.S. Army Marksmanship Unit and prepare them for the 1996 Atlanta Olympic Games.  She developed the organizational and public relations strategy & traveled the world with the athletes/marksmen promoting them. Rhonda traveled as part of the U.S. delegation to both the World Military Games in Rome (1995) and the Pan American Games in Argentina (1995). Soon after these events but before the Olympics started, the Atlanta Olympics committee hired her away to work the 1996 Games as an Information Manager where she trained media on how to use the Info 96 information system.  She also conducted press conferences, handled media logistics, and approved internal news releases for her venue to the media. These experiences led to Rhonda’s fascination with technology in a business context. Rhonda earned the MBA at Columbus State University where her love for technology and information systems really became clear. While finishing her MBA, Rhonda was offered a position with one of Georgia’s largest credit unions. She was hired to pull the marketing functions out of the various departments and create a fully functioning marketing department. Rhonda noted, “This was a challenging, exciting and very successful venture. I also found myself dabbling in information systems: website development, customer relationship management, client management systems, etc.” In 1999, Rhonda was offered a Presidential Fellowship to pursue doctoral studies in MIS (officially called Management of Information Technology and Innovation) at Auburn.  Her first post-doctoral position was as an Assistant Professor at the University of Arkansas at Little Rock.

After a detour to pursue a passion of bicycle racing, fitness, and sports management, Rhonda accepted a faculty position at Louisiana Tech. Since here, she has been actively rekindling her research agenda. Rhonda is very passionate about teaching. She stated, “I think one of the biggest rewards in life comes from giving back. Of course, I give back through my humanitarian work, but I also give back through the passion and purpose from which I approach my teaching and by sharing professional and life experiences with students that give context to theory.”  Rhonda brings excitement and enthusiasm to the classroom through a number of innovative and creative techniques. It is her goal to create an environment where students want to learn and work hard. Some examples of innovative approaches that Rhonda uses include:

Simulation – to illustrate enterprise resource planning and the use of information systems in managing a business, Rhonda uses ERPSim in the general MIS class for all business majors. The simulation allows them to manage the pricing and distribution of bottled water in a real-time environment. The students compete against each other real-time in a real version of the SAP software. The students get excited and very competitive while they are learning to navigate the system, read financials and sales reports to make immediate pricing and distribution decisions, and then they are able to see the results of their decisions in real-time.

Deck of Cards – to illustrate business process flow and modeling, Rhonda breaks the students into teams and gives them each a deck of cards that have been pre-shuffled. Students are then given a sorting task to do. In this she purposely sets up bottlenecks in the cards. The class then has discussions about identifying and modeling business processes as well as process improvement issues and the role IT plays in that.

CIS capstone course real world project — Rhonda uses a term-long project in the CIS 450 class where students move from project inception to working prototype. Rhonda attempts to make the project as real-world as possible with milestones and progress report meetings conducted similar to the way they would do them in industry. Last year, Rhonda began incorporating a peer review process. The students are assigned a peer review team, and the teams meet in the classroom while Rhonda walks around and guides them. They do code walkthroughs and document reviews and provide feedback to each other to help them improve the system ideas and prototypes they are working on before presenting the final version to the client.

Rhonda has two daughters. Rachel is a junior in the College of Business at the University of Arkansas and is active in the UA Inspiration Singers and Leadership Walton. Marie has a BS in Psychology and a BS in Spanish, and is the founder of the Little Rock Rotaract Club. Currently she is completing her Master’s degree in hospital administration at the University of Arkansas for Medical Sciences. Rhonda expects her first grandchild in May. Rhonda is a former bicycle racer & won two Arkansas State Championships (Arkansas State Road Race Champion, 2008; Arkansas State Criterium Champion, 2008). She has run a half-marathon, hiked 21 miles across the mountain ranges of Haiti in one day, biked as many as 140 miles in one day, and climbed a 14,000 foot mountain. She achieved those athletic feats after a 113 pound weight loss and was featured in Bicycling magazine a few years ago. Rhonda has a deep love of travel and has been to around 26 foreign countries and most of the states. She strives to travel with an open mind to explore new places and cultures and learn.  Some of her most notable travel includes: 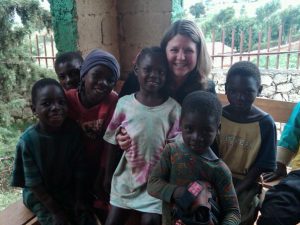