Home › Faculty Feature › Todd Maggio: Where Art & Science get down to Business

Todd Maggio: Where Art & Science get down to Business

Todd Maggio graduated from Louisiana Tech with a Bachelors of Fine Arts in Graphics Design in 1993 and has spent nearly his entire career in education. After cutting his teeth for a year in the Baton Rouge advertising market, Todd moved to South Texas to work in the public relations office of Texas A&M University–Kingsville. His talent gained immediate recognition and he soon moved to the Texas A&M University System Headquarters. Working under the leadership of Chancellor Barry Thompson, Todd learned the breadth of education’s service and its impact on the community at large, particularly those who seemed the least invested. Through his award-winning work for the Texas A&M System Todd developed a respect and admiration for the dedication of its employees and a much deeper understanding of academia’s role in society. After five years in the A&M System, it was time for Todd to fully commit to the cause of education. He made the decision to return to school and pursue a master’s degree in visual communication design. He was accepted into to the MFA program at the University of Washington in Seattle and was selected for that year’s scholarship prize. Studying in Seattle at the height of the tech boom and immersed in a program built on the Swiss school, Todd turned his attention to usability design and human use issues. Maggio found early success with his first project, The Board Book, which by chance documented the 2000 WTO riots.

Soon after graduation with his MFA in 2001, Todd collaborated with former teacher Karen Cheng on “Sento at Sixth and Main”, a book documenting the lives of Japanese-Americans along the west coast—a contribution recognized by I.D. Magazine, Print and AIGA.  As Todd’s knowledge of design’s history and function deepened, so did his belief in a greater responsibility and role for designers in everyday lives.

Todd accepted a faculty position as an Assistant Professor at Louisiana Tech in 2001. Soon after, he partnered with friends back in Seattle to co-found TrafficGauge, a tech start-up dedicated to solving traffic-related problems.  By developing strategies, establishing corporate identity, designing user interfaces, and building a web site, Todd was able to apply his newly formed design philosophies with remarkable success. TrafficGuage was the first service and device of its kind in the United States, gaining the praise and recognition of such diverse media as NBC, MTV, NPR, NYT, Popular Science and WIRED which awarded it a 10/10. Todd’s philosophy was reaffirmed by TrafficGauge’s impact on society and the environment — research confirmed that, aside from stress, TrafficGauge also reduced an average of 2400 lbs of CO2 emissions per year… per driver.

More recently, Todd has focused his attention on introducing entrepreneurship into the art curriculum. Through interdisciplinary collaboration and the support of the Enterprise Center (Tech’s on-campus incubator of innovation-focused activities) courses are being developed that merge science, art, and business. For example, Todd has worked with Debbie Inman (Business/ Entrepreneurship) and Kelly Crittenden (Engineering) to develop and teach an interdisciplinary Innovative Product Design (IPD) class. 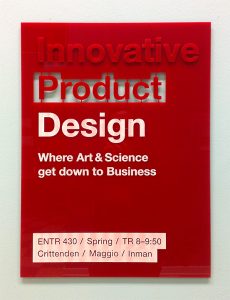 The IPD class gives students first-hand practice with building new product prototypes. Cross-functional student teams are given a design challenge and then must present a completed prototype at the end of the quarter. Teams hold focus groups to help them design products best suited to address customer problems. Todd and Kelly were recently awarded one of Tech’s Student Technology Fee grants to outfit the class prototyping lab with MakerBot 3D printers, laser cutters, computers and other machinery. This past spring, four teams developed products that help people interact with urban places. Following such real-world explorations, Todd continues to push the boundaries of design education by challenging students to think outside the cubicle and consider the greater range of opportunities that await. I can’t wait to see what’s next. 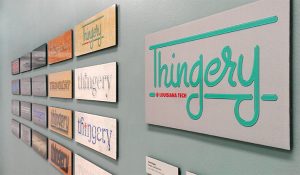