Collin Wick grew up in the Twin Cities of Minnesota, spending many weekends in northern Minnesota, a part of the country with many similarities to northern Louisiana.  These similarities helped prepare Collin for a transition to Tech, finding the rural atmosphere familiar despite growing up in a large metropolitan area.  He got his Bachelor’s degree from a small public University in western Minnesota, University of Minnesota at Morris, which he chose over the large University of Minnesota, Twin Cities, because of the close interaction with faculty, and excellent student body.  UM-M often held some of the highest retention and graduation rates for public schools in Minnesota, similar to Tech’s performance.  However, their smaller student population of around 2000 students didn’t allow them to serve as broad of a mission as Tech.  Finding a university with both a strong teaching and research mission was important to Collin when looking for a place to settle. After getting his PhD at the University of Minnesota Twin Cities, Collin spent a year in Greece on an NSF fellowship doing some research with a well-known Chemical Engineering faculty member.  He then went to the Pacific Northwest National Laboratory in Washington state (the part of Washington that is desert), before coming to Tech. 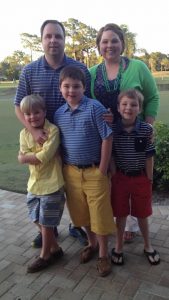 Collin has been married for 14 years, has three boys (current ages 8, 9, and 10) who all attend AE Phillips on the Tech campus.  Collin’s wife, DeEtte teaches 6th grade English, along with a few electives, at AE Phillips.  This allows the entire family to be in the same location for most of the day.  Most of Collin’s time away from school is spent with his family, helping his kids with piano, schoolwork, football, baseball, and other sports.  Also, time is spent attending and doing activities at Trinity United Methodist Church, where Collin plays the saxophone in the Church orchestra, and helps with 4th grade Sunday school. Collin has taught or developed eight different courses, ranging from freshman chemistry to graduate level physics.  However, his primary teaching duties are junior- and senior-level physical chemistry lecture and laboratory courses.  These courses are based on very fundamental principles that are often very mathematically based, but Collin has always put a focus on showing the practical implications of what students learn.  Some of the comments from students have revolved around how they appreciate that while the math and fundamental principles are taught, it is always around an umbrella of how these factors influence real-life situations, conditions, and processes. Collin has also developed multiple new laboratories for physical chemistry and his newly developed Environmental Chemistry course.  In Environmental Chemistry, he has instituted a student led project in which they analyze soil, water, or air samples from around the region.  This has led to them presenting information to the community, raising awareness of potential environment concerns, and has led some students to choose careers in environmental testing.  Finally, Collin has developed a pathway for Chemical Engineering majors to get a second degree in Chemistry, which has helped to increase the number of Chemistry graduates.  This, along with other efforts by the Chemistry faculty, have led to nearly double the average number of annual Chemistry graduates in the last few years. 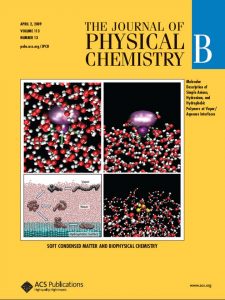 Since arriving at Tech, Collin has published 26 manuscripts in peer reviewed journals, all with moderate to high impact factors.  The research carried out by Collin is computational, and his models and simulations must be run on supercomputers because of their complexity. His research covers a wide range of applications, from supporting the development of better anode materials for lithium ion batteries to answering fundamental questions about the role of an interface in chemical reactivity.  Collin’s research is partially funded by a major NSF grant supporting a state-wide consortium known as LA-SiGMA (Louisiana Alliance for Simulation-Guided Materials Applications) http://institute.loni.org/lasigma/index.php. 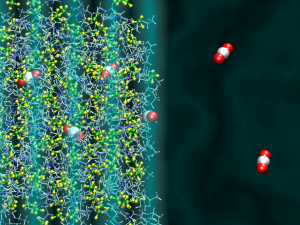 Collin’s interest in describing science in a manner that can be interesting to non-experts has led to him using different graphical software, which has led to him getting his work featured on 7 journal covers, something that is quite rare for a junior faculty member.  One example of Collin’s graphical artwork is provided here, in which the surface of a special type of liquid (denoted BMIM-BF4) can accommodate much more carbon dioxide in pockets at its surface than it can hold in its interior.  This is important for carbon capture and sequestration, as exhaust from coal plants can be scrubbed for carbon dioxide and other gasses in an efficient way to reduce emissions. Collin’s interdisciplinary approach to education and research enhances Louisiana Tech’s core strengths. His transformational research with real-world impacts is important to Louisiana and the nation.  Collin’s ability to translate complex chemistry into beautiful art that can be well received as either a journal cover or a piece of wall art is truly special, and we are so pleased that he is doing that work at Louisiana Tech.