Staff Feature: Mr. Jake Reichley: You can bet your Poinsettia on Jake 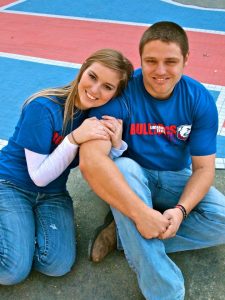 Jake and his wife Jenae’

Last summer, I had the opportunity to work for a few hours in the Tech greenhouses and gained a much better appreciation of what it takes to run such an operation. I also got to know the Lab Supervisor for the greenhouses and gardens, Jake Reichley.  Recently, I asked him what got him interested in this position.  Here is Jake’s story.

“When I was a kid, my brother and I started to do yard jobs for people, just simple things like weeding flowerbeds and picking up debris. As we got a little older, we started doing mowing jobs as well.  Eventually, I began working at greenhouses and nurseries around the area. Then, I got my first taste of running a nursery. While it was only a month-long experience, it was nice to figure out pest issues on my own with no one to give me the answers.” That experience was enough to get him hooked.

Later, Jake moved to Ruston to attend Tech. He was the only plant science student in his University Seminar class and his professor, Dr. Mark Murphey, told him that he should join Greenscape and apply for a student job at the greenhouses. Jake started working at the Tech greenhouses at the end of the fall quarter, right in the middle of Poinsettia season. He stayed with the greenhouses throughout his college years. During the summers, he stayed in Ruston to work at Squire Creek Landscaping and Riverside Landscaping.  Through these jobs, Jake gained a lot of landscaping, irrigation, and greenhouse management experience. In March 2012, Jake graduated from Tech with a Bachelor’s in Ag Business/Landscape Design and Turf Management with a minor in Plant Science.  Shortly thereafter, he was hired as the Lab Supervisor at the greenhouses. That year, with co-worker Tisha Sonnier and the help of retired lab supervisor Roxie Jordan and Plant Science Professor Dr. Peter Gallagher, they raised Tech’s largest Poinsettia crop to date.

Jake says that one of the best parts about his job is when high school groups come in to learn about greenhouse management, or when he goes to their schools to teach them. He also enjoys working with his co-lab supervisor, Nicole Thomas, interns, and others who work in the greenhouses.  “I love the chance to teach people aspects of greenhouse management and how things that ‘are supposed to work’ don’t work while things that ‘won’t work’ actually do.” Jake stated, “Lots of people think that just because you have a degree in it, you’re an expert, but that is not the case.  I am constantly reading and studying things to learn more, or am testing out new varieties of other plants. Many people who visit the salesroom tend to get aggravated because we have so many different varieties of plants and not large quantities of single varieties. We do this because we like to test how they grow in the greenhouses during heat stress or water stress. These things are potentially helpful to other growers who are considering using these plants.”

Recently, Jake and his team were awarded a Board of Regents grant to update and replace some equipment. “Now, we can begin to have better control on environments and do a few more varieties of plants that haven’t typically done well in our greenhouses,” Jake said.  They have also taken old, nonfunctional greenhouses and have begun to put them back into operation. One of them is back in full working order and is growing perennial plants for spring that would typically die back during the winter. The other two will be used to start a shrub growth and tree growth operations.

Jake’s goal is to get a Master’s degree so that he can teach some courses. Having learned a few things from him during the brief time that I worked with him this summer and fall, I am betting that he achieves his goal.  And I am betting that soon he will have Tech’s most spectacular Poinsettia Show ever, as the Tech greenhouses come alive with color befitting for the holidays. See the Nov. 29  Monroe News Star article and video featuring Jake and Tech’s Poinsettia Show: http://www.thenewsstar.com/apps/pbcs.dll/article?AID=2013311260024