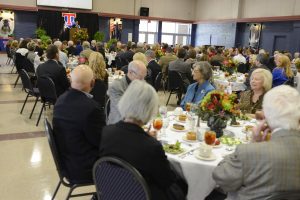 Bob Haley, Class of 1962 Business – Keith Caldwell, Class of 1983 Education – Susan Stierheim Adams, Classes of 1984 and 1995 Engineering and Science – Mike Pearson, Class of 1969 Liberal Arts – O.K. “Buddy” Davis, Class of 1969 We also dedicated the Paul J. Pennington Liberal Arts Conference Room in honor of the former faculty member and Dean of the college.  Dr. Pennington served as my dean when I was getting my BA in Architecture and throughout my early years as a faculty member.  He had a major impact on many programs at the university and was highly respected as an administrator. 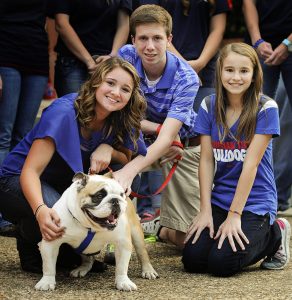 The pep rally was held in the Quad.  SGA President Allison East introduced the Homecoming Court and we were all thrilled with the introduction of Tech XXI.  My grandson Christopher was excited to see the Band, Cheerleaders, Regal Blues, and, of course, Tech XXI. Then, late Friday evening, we recognized the Class of 1963 into the Golden Society.  There were many greats in that class including my former Art Professor Phoebe Allen and President Emeritus Dan Reneau. All in All, a GREAT Day. 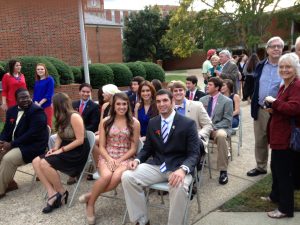 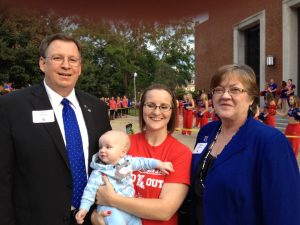 Christy and Christopher at his First Pep Rally