Faculty Feature: Dr. Dentcho Genov: It is a Material World, Metamaterial, that is! 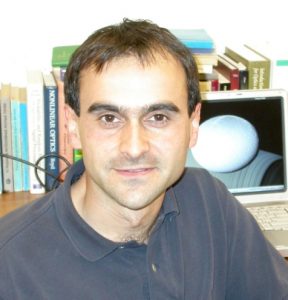 Dr. Dentcho Genov is emerging as a global leader in the metamaterial world.  Dentcho is currently a LONI Fellow and a joint faculty in Physics and Electrical Engineering. Before coming to Louisiana Tech five years ago, he was an associate researcher at the University of California at Berkeley, and has a diverse background in various scientific disciplines. He has a European Master of Science degree in thermonuclear plasma physics from Sofia University, Bulgaria. He came to the US in 1999, and over the next 6 years, earned two additional M.S. degrees in Optics (New Mexico State) and Aerospace Engineering (Purdue), and then earned a PhD degree in Electrical Engineering (Purdue).

Dentcho’s research has attracted extensive professional and general media interest. He is one of the founders and a leading expert in a new explosively developing field in optics called metamaterials.  The metamaterials are artificial, man-made optical materials that allow manipulation of light at will. This is accomplished by precise engineering of the microscopic magnetic and electric responses of composite nanoscale materials and is equivalent to virtually creating artificial types of quasi-atoms and quasi-molecules. By cloaking an object with metamaterials, theoretically light could be guided around the object thereby making it invisible. Dentcho’s work has been broadly recognized by the scientific community and the general public. TIME magazine included a Nature paper he co-authored in 2008 as one of the Top 10 Scientific Discoveries and 50 best inventions of that year. This work was also ranked No. 7 among the Top 100 Stories of 2008, as announced by DISCOVER magazine. Since he joined Louisiana Tech, he has continued to reshape the field of optics by publishing three additional papers in Nature Physics and Nature Photonics. His research at Tech has been featured and extensively reported in the US and foreign media including Nature News, Science News, Wikipedia, The Huffington Post, ABC News, CBS News, FOX News, Berliner Zeitung (Germany), Nanowerk News, Trud (Bulgaria), Wired.com, ArsTechnica.com, Universe Today.com and many others. Dentcho is one of the most cited researchers at Louisiana Tech with more than 2240 citations since January 2009. 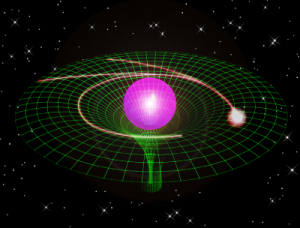 Mimicking Gravity on a Chip

Just recently on Sept. 29th, Dentcho reported in the journal of Nature Photonics a study where a black hole analogue was recreated in the lab, for the very first time.  This work was a follow up on a paper he published in Nature Physics three years ago where he established the theoretical background for recreating gravitational analogues in the lab and proposed specific experiments. Gravity can bend and even trap light, an effect known as gravitational lensing. Now, Dentcho’s ideas have been experimentally demonstrated. An analogue of a massive celestial object (such as a neutron star or black hole) has been developed on a chip.  Apart from simulating gravity, this microchip can be used to develop novel broadband, radiation-free, and thus “perfect” traps for light. These microscopic traps can bring a new technological route toward development of microscopic lasers and high efficiency solar cells. See the video of light bending and trapping observed in Dentcho’s experiment – Genov Mimicking Gravity Experiment Movie

Dentcho deeply believes that an enthusiastic teacher, who is passionate about the subject he is teaching, is the most powerful instrument that can help to ignite curiosity and desire for knowledge in students. As a joint faculty in Physics and Electrical Engineering, he has taught large variety of undergraduate and graduate courses. Teaching courses cross-linked between Physics and Electrical Engineering is a challenge. Physics and engineering students have rather different backgrounds and have to be facilitated in the process of presenting the subject matter. In 2012, Dentcho introduced an innovative and highly successful computation based pedagogical methodology in the teaching of classical courses such as Electromagnetic Theory and Quantum Mechanics. This methodology relies on supplementing the current analytical approach toward teaching these disciplines by incorporation of a virtual lab environment through which sample problems can be studied using available specialized software, mimicking the actual experimental validation of the concepts. Dentcho has served as research advisor to many graduate and undergraduate students. Five of his PhD students are enrolled in the Engineering Physics PhD Track program. The Engineering Physics PhD Track was approved by the Louisiana Board of Regents in July, 2011. Currently, there are 12 physics students enrolled in the program, with Dentcho’s students constituting a large portion (~42%) of the total. 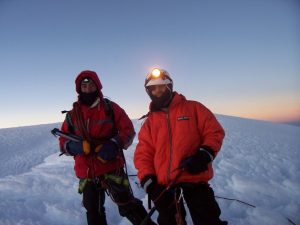 Dentcho is Renaissance man.  He is a painter, Tai Chi master, Buddhist, marathon runner, extensive traveler and a mountain climber. Dentcho has traversed the entire globe having visited and explored more than 30 countries on six different continents. Only a few people can claim to have been on the top of the world, and Dentcho is one of them. In 2005, he climbed the summit of Chimborazo (20,564 ft.), in Equador. The Chimborazo volcano is situated almost exactly at the equator and due to the equatorial bulge, its summit is the farthest point on the Earth’s surface from the center of Earth (more than 7 kilometers higher than Mount Everest). His lifelong motto “The Tao abides in non-action, yet nothing is left undone” comes from the Chinese philosophy, and he still dreams of walking on the surface of Mars. Most important of all, Dentcho is a loving father and a husband. His wife Gergana Nestorova is a research staff member in the Center for Biomedical Engineering and Rehabilitation Science. They are proud parents of two adorable children Alexander (3) and Gabriela (2) who were born in Ruston. Dentcho has been on top of this material world, and it is clear that he will one day be on top of the metamaterial world. We look forward to many more happy and fruitful years for Dentcho and Gergana as part of the Louisiana Tech family and the greater Ruston community.