David Szymanski makes athletics his business.  While a student athlete in baseball at the College of DuPage in Glen Ellyn, IL, and Texas Lutheran University, David was the starting short-stop and received All-Conference, All-District and Academic All-Conference honors.  David earned a BA in Fine Arts and a BA in Kinesiology from Texas Lutheran.  He went on to earn a MEd in Physical Education with an emphasis in Sports Management from Texas State University in San Marcos in 1995, and a PhD in Exercise Physiology from Auburn University in 2004. Upon graduation from Texas Lutheran, David served as an admissions counselor for two years, and then became an Assistant Baseball Coach for four years. While serving as volunteer Assistant Baseball Coach at Auburn University, the team went to the College World Series.  Notable players David coached while there include Tim Hudson, pitcher for the Atlanta Braves, and David Ross, catcher for the Boston Red Sox.  As Exercise Physiologist for the Auburn team, David was responsible for all of the strength & conditioning and testing of the baseball players. From Auburn, David decided to take his work to the private sector where he was the Director of Sports Performance of Velocity Sports Performance in Tulsa.  That experience served him well as he learned more about the commercial opportunities and needs in sports physiology. 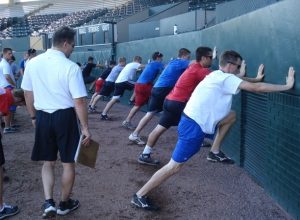 David has used some innovative approaches to enhance learning, discovery and service with his students.  For example, David’s undergraduate and graduate students have been involved as subjects or investigators in 35 different research projects over the last 7 years. Several graduate and undergraduate students have assisted David in training the baseball team and many have also been involved with the Tech Wellness Fair where they perform various tests, ranging from body composition to vertical jump testing. The entire Tech Kinesiology student body has benefited from David’s passion, energy and dedication.  Students have been involved with the FCA Nike SPARQ Football Combine Testing where they record performance values for height, weight, 40 yd. dash, vertical jump, 5-10-5 Pro Agility, Medicine ball chest pass, and standing long jump. Graduate students have attended state, regional, and national conferences and given research poster presentations.  Four of his former graduate students are working on or have earned their doctorates in exercise physiology.

David uses innovative techniques in his service to the baseball team as he has introduced Vizual Edge vision training.  Zach Voss, graduate student and former Tech football player, is doing this for an independent research experience.  They have tested various warm-up devices used in the on-deck circle with the baseball and softball teams and have used the Rotex device to evaluate its effect on improving range of motion on pitching and golf performance.  David and his students also evaluated the use of the Mind Meter android phone software with the LaTech golf team. David served as the University Senate President for the 2011-12 academic year.  He was named the Virgil Orr Undergraduate Junior Faculty in 2008 and University Senate Chair Award recipient in 2013.  He holds the Eva Cunningham Endowed Professorship in Education and has received the Outstanding Research Award for the Department of Kinesiology four times. He was the Vice President of the National Strength and Conditioning Association last year and has presented at the National Strength and Conditioning Association’s Sport Specific Conference or Coaches Conference in 7 of the last 9 years on the topic of how to train baseball players.  He is an Associate Editor for three national research journals and has had 13 national presentations, 60 poster presentations, and published 25 articles in national journals.

David has trained 30 athletes in Professional baseball with ten of those having played in MLB.  Seven of his former graduate students have worked or are now working in professional baseball. Kinesiology is one of Louisiana Tech’s largest and fastest growing programs.  David Szymanski is a major reason for that growth and the increased interest of our students.  Our students benefit because of his passion and drive, and our student athletes benefit by having a true professional to mentor them. David’s wife Jessica is an instructor of Kinesiology at Tech. Jessica was an All-American middle blocker for the Texas Lutheran volleyball team.  They have two sons, Dawson, who is 10 years old, and Justin, who is 8 years old.  They are a great family that contributes to a greater quality of life on campus and in the community.