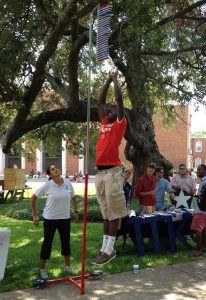 Thursday was one of the those very special days on Tech’s campus.  Andy Cline, Tech’s Orientation Director, had decided that we should host “Time Out For Tech” on a week day and that proved to be a great decision. Thursday morning, students began showing up at the Lambright Center for check-in and by the end of the day, more than 1200 students and a thousand parents & teachers had been on campus participating in TOFT.  The energy was high and everyone had a great day.  After a brief check-in, students were provided tours across campus looking at the Lambright Center, University Park, Alumni Walkway, Centennial Plaza and more.  Faculty and staff were everywhere, mingling among the crowd and talking to students and parents.  Student organizations and several departments had booths and activities for students as they waited for the formal TOFT kickoff.  Kinesiology instructor Jessica Szymanski enticed students to check out their high-jumping abilities while other students checked out the national award winning eco-marathon cars produced by engineering students. 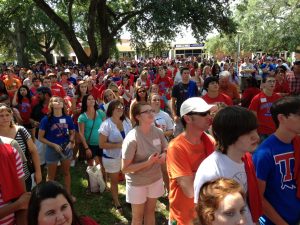 The big Tech Welcome began at 2:00 in the Quad.  I have never seen so many people in the Quad.  I gave a brief welcome and then Andy did his magic, greeting the students and informing them about admissions requirements and scholarship opportunities.  Then, Jim Robken and the Tech Band came to the center of the Quad and gave the crowd its first introduction to a Tech pep rally, teaching everyone several of the Tech songs and cheers.  The Quad was really rocking as Jim made sure that everyone participated in the cheers.  From the Quad, students were escorted off to meet with faculty and staff in the different departments and programs.

Over at The Joe, fans were already tailgating while getting ready for the big game against Louisiana and C-USA foe Tulane. The Team was welcomed as they entered Tailgate Alley. After mingling with alumni and friends for a while at the Alumni Tailgate at Argent Pavilion, Kathy and I made our way to Coach Holtz’s office at the fieldhouse to meet a couple of special guests, Terry Bradshaw and Phil Robertson, who were re-uniting on the Tech campus for the first time since they had last played together in the sixties.  We were all honored that they chose to return to join us for the C-USA and Fox Sports 1 opener. 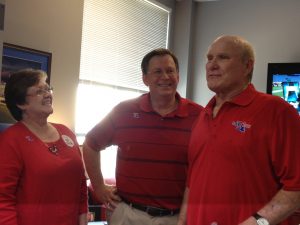 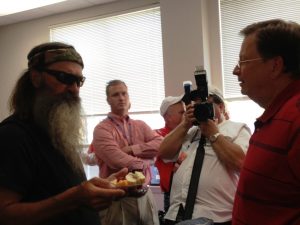