This has been another exciting week at Louisiana Tech.  On Monday, we woke up with advance news that the U.S. News & World Report was releasing its 2014 Best Colleges list, which evaluated and ranked more than 1,500 colleges and universities in critical areas such as graduation and retention rates, faculty resources, student selectivity, peer assessment, and rate of alumni giving.  For the third consecutive year, Louisiana Tech University earned a Tier One ranking among “National Universities” and is one of just two public institutions in the state to have earned this distinction.  Louisiana Tech was the only university in the state to see its national ranking rise over last year, moving up nine spots from the 2013 list.  In addition to our National Universities ranking and for the fourth time in the past five years, Louisiana Tech ranked among the Top 20 in the nation for graduating students with the least amount of debt.  We also moved up seven spots in the Top Public Universities list to No. 108 and saw a rise in our undergraduate engineering and business program rankings as well.  What our faculty and staff have been able to achieve, in the face of adversity and limited resources, is nothing short of remarkable. Late Tuesday, AD Tommy McClelland announced that two of Tech’s most famous alumni, Terry Bradshaw and Phil Robertson, would be attending Thursday’s nationally-televised Conference USA opener against Tulane.  That created quite a buzz!  But the “Blond Bomber” won’t be the only Hall of Fame and four-time Super Bowl champion quarterback in the house on Thursday.  Joe Montana will also be in attendance to watch his son Nick play quarterback for Tulane. Three quarterbacks, eight Super Bowl championships, and one Duck Commander…that should make for quite an evening! On Wednesday, I had the opportunity to meet with the Shreveport Times Editorial Board.  It was good to see some alumni and friends represented on the board.  I also had the opportunity to go by to review some potential office space for me in downtown Shreveport.  I am hoping to have a space that will enable me to have more frequent interactions with community leaders and others so we can more effectively develop plans to meet needs in the Shreveport/Bossier community. On Wednesday, it was also my pleasure to welcome graduate students to Tech in our Graduate Convocation, an event led by Interim Dean of the Graduate School, Dr. Sheryl Shoemaker.  This ceremony provided a brief introduction to Tech and gave students the opportunity to meet each other and the faculty.  Our graduate students play an important role at Louisiana Tech and are a major factor in Tech’s advancement as a prominent national research university. 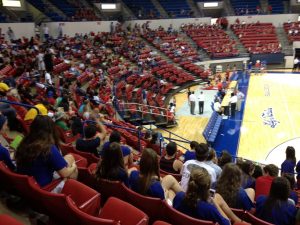 Late Wednesday, I had the opportunity to stop by the TAC to join in on the pep rally.  It was great to see so many students there including men’s and women’s basketball, soccer, fraternities, sororities, cheerleaders, regal blues, and of course the Tech Band.  JMac, Tommy, Mike and Theresa got the crowd pumped and ready for Thursday night’s game with Tulane. GO DOGS!