Professor Guy Carwile is continuing the Tech tradition of preserving the architectural records of Louisiana.  Guy is beginning his twentieth year as a faculty member in the School of Architecture. After earning architectural degrees from LSU and Rice University, Guy resided in Houston, TX, where he worked 10 years for several architectural firms specializing in commercial, medical, residential and interior projects. Since that time, Guy and his family have made Ruston their home and have become Tech red and blue.  He and his wife Stephanie (an assistant professor in Interior Design), and daughters, Mary Taylor (a senior majoring in Interior Design) and Parker (a sophomore majoring in English Literature) are all Louisiana Tech bulldogs now.  When Guy arrived in Ruston in 1994, he taught coursework in the Interior Design program. Over the years, Guy’s teaching assignments have changed to include all of the building systems courses in the architecture program.  Guy keeps his real-world skills sharp by maintaining an independent architectural practice where he designs houses and additions to existing houses. F. Lestar Martin, a retired professor of Architecture and former professor of mine, had a long history of documenting and preserving traditional architectural works in Louisiana.  Among his many accomplishments, Lestar published his work on Folk and Styled Architecture (such as dogtrot houses) in Louisiana, and preserved the works of Monroe & Shreveport architects Clarence W. King and William King Stubbs in Tech’s archives (Stubbs’ grandfather Francis P. Stubbs donated the 20 acres in 1895 upon which Tech was built).  Guy Carwile has continued to expand upon the work of Lestar Martin and has added his own flair, by connecting 18th century buildings to 21st century technologies. 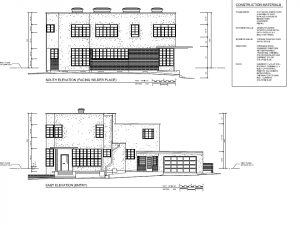 Upon Lestar’s retirement in 1999, Guy assumed the responsibility of teaching Architecture 403 – Project Documentation.  This service learning course focuses on researching, measuring, and precisely drawing historic resources in north Louisiana. Guy enhanced the documentation process from a hand-drawn activity to a computerized activity.  He has also updated the measuring processes from the use of traditional hand tools and methods to the use of laser-based devices. The students in the course provide a much needed service to the historic preservation community by performing background research and producing time and labor intensive measured drawings. 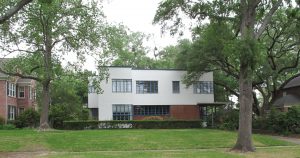 Built in 1934 in Shreveport, the Wile house is the oldest extant International Style House in Louisiana

Cultural resources documented through Arch 403 include 18th, 19th and 20th century subjects in Natchitoches, Shreveport, Minden, Monroe, and surrounding areas.  The drawings and supporting materials produced by the students are donated to the National Park Service in Washington, DC, and the Division of Historic Preservation in Baton Rouge where they are made available to researchers and the public-at-large. To increase accessibility of the drawings to the region, drawings and support materials are also donated to the Prescott Memorial Library archives as well as the archives at LSU-Shreveport. Each year, the students’ drawings are included in the Charles E. Peterson Prize competition of the National Park Service for the best measured drawings produced by student teams. Documentation projects guided by Guy since 1999 have received numerous recognitions in the Peterson Prize competition including 2 first place awards, 3 second place awards, 1 third place award and 2 honorable mentions. 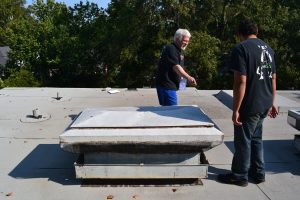 Guy and a student, Christopher Perez, discuss a gravity vent on the roof of the Wile house

One of Guy’s major achievements occurred in 2007 when he inaugurated a new course focusing on the Architecture of Louisiana.  The subjects of this survey course begin in 1714 with the founding of Natchitoches and extend through the late 1970’s.  The course has been offered in  both face-to-face and online formats, and allows students to appreciate the breadth of cultural resources that exist in the state.  As a distance learning offering, the Architecture of Louisiana course has been taken by architecture majors, interior design majors, and a large number of general studies majors.  Most of the students enrolling in the course reside in the north Louisiana region though some students take the course from afar including other locations in Louisiana, Texas, Latin America, Europe, and even a member of the military stationed in Afghanistan. Thanks to Professor Guy Carwile, our students are making a difference by using 21st century technologies to document and preserve Louisiana’s architectural history records to benefit the nation.  What a great experiential learning opportunity for our students!