On Friday, I met our new AFROTC Commander Col. Devin Kudlas. Col. Kudlas, who earned a bachelors degree in electrical engineering from Clemson University, comes to Tech from Barksdale Air Force Base where he was working with the Global Strike Command. 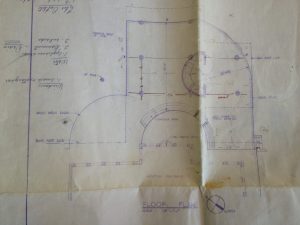 I believe that Col. Kudlas will continue the fine work done by our last commander, Col. Brian Buck.  AFROTC has a long history at Tech, and it is an important component of what we do to develop students into leaders. It has produced many great leaders over the years and through that program, Tech has developed many strong relationships with the Air Force.  One of the greatest was Retired Air Force Gen. David C. Jones, a former chairman of the Joint Chiefs of Staff who was also a chief of staff of the Air Force.  President Taylor presented Gen. Jones an honorary doctorate of laws degree in 1975.  Gen. Jones  passed away at age 92 on Aug. 10. 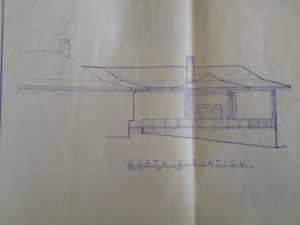 Kathy was doing a little work at the President’s house on Saturday when she ran across something that was quite special.  She found a blueprint for the addition of the back patio area of the house, where many parties and other gatherings are now hosted.  This architecture work was done in the mid-seventies and I am almost certain that I did that drawing when I was working for Wells & Parker Architects of Monroe.  I remember doing the work and I recognize my lettering, but who would have ever thought things would have worked out like this?  And it was even more remarkable that Kathy happened to find a copy of the drawing as she was doing some cleaning. A special note for our architecture students-put your best into everything you design for someone, for someday it might end up being yours! We look forward to being able to host many of the Tech Family on that patio in the future. 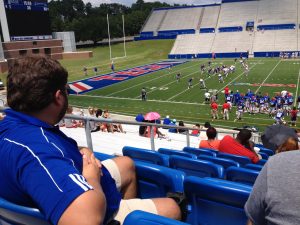 I enjoyed watching the Bulldogs have their scrimmage on Saturday.  There was a good crowd at the scrimmage and a great crowd at the tailgate afterwards.  Fans came to enjoy the food and to get to meet the players.  I enjoyed the scrimmage with my good friends, Heath and Luke Tims, and former Director of Libraries Mike DiCarlo.  Heath is our new President of the University Senate and is the newest member of the Athletics Council.