The early part of this week was spent on the road between Ruston, Baton Rouge and Shreveport.  I am still chairing a couple of state-wide research committees under the Board of Regents and given the importance of those committees to the State and Tech, I am continuing my involvement for now.  The EPSCoR Committee is responsible for overseeing some major state-wide research projects, such as the $20M NSF LA-SiGMA project that involves several Louisiana universities.  Tech professors play major leadership roles in that project including Dr. Ramu Ramachandran who has provided superb project leadership along with professors from LSU and Tulane.  Ramu and other Tech professors such as Pedro Derosa, Tom Bishop, Daniela Mainardi, and Jenna Carpenter were among those who made key presentations at Monday’s conference.  https://www.facebook.com/LASiGMA.Project?ref=br_tf. Shreveport Rotary invited me to speak on Tuesday.  It was great to see so many Tech alumni and friends in the audience.  The topic of my presentation was “Louisiana Tech University: a national research university for all of North Louisiana” and the message was about the crucial roles that research universities play in enhancing economic competitiveness of a region and how Tech is demonstrating such impacts across North Louisiana. Thursday was the major day for our final freshman orientation session. We had another great turnout of students and parents, and it looks like this is going to be an excellent freshman class. We will continue to build upon that momentum to expand recruiting for next year.  Congratulations to Andy Cline and all admissions staff, student life staff, orientation student leaders and others for an outstanding summer orientation program. 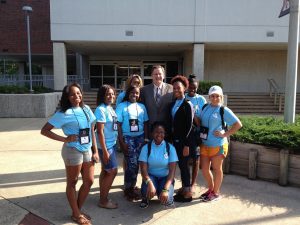 As I was returning to my office from the “Big Tech Welcome” at Orientation, I ran into a group of students who were participating in the LA GEAR UP camps (See my last post on Lindsey Keith-Vincent.)  The students were interviewing people on campus to find out what they like most about Tech.  Of course, my response was “the students,” for without them, we have no reason to exist.  After the interview, the students found out that they had interviewed the President.  They were a big hit when they returned back to present their findings to the rest of the campers.  These camps provide a valuable service to students, but they also provide excellent recruiting opportunities for us. 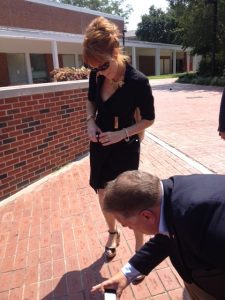 On Thursday, I also had some other visitors including Scott Martinez from the North Louisiana Economic Partnership, Kevin Smith from Logic Nation, and Ruth Franks & Mandi Ford from UT-Austin.  Ruth is a Tech biosciences alumnae who directs Career Services for the College of Natural Sciences.  It was great to take her to see her “brick” for the first time since graduating in 1993.

Dr. Sandy Woodley, President of the UL System, also stopped by to visit with our Nursing program and to see some of our doctoral engineering students who are working on some very interesting research projects.  I appreciate the tremendous work that Dr. Woodley is doing to build support for higher education.

I was also able to spend some time with AD Tommy McClelland and the architect for our new athletics facility.  The plans are looking good and we will plan to share more updates on the project soon. 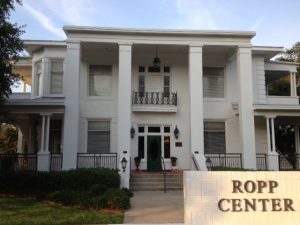 On a personal note, Kathy and I moved into the Ropp Center this week.  Actually, Kathy moved in while I was out traveling the roads.  I am so appreciative of all that Kathy has done to keep our home intact while transitioning from one residence to the other. But we find it very special to be staying in the Ropp Center where 7 of Tech’s 13 previous presidents have lived since the house was built in 1911.  The Ropp Center was renovated in 2002 and hosts the faculty & staff club on the first floor.  Margie and Jerry Drewett did a beautiful job in decorating the facility.  I’ll share more pictures in future posts.