Campuses have cultures.  It does not take long to be on the Louisiana Tech campus to get a real sense of the culture.  That culture has been developed over the 119 years of Tech’s history.  Tech’s culture has been reinforced by the strong and stable leadership of Presidents Reneau, Taylor and Ropp over the past 63 years.  Approximately 10 years ago, our students and administrators formally recognized the culture of Tech that is reflected through its traditions, values and principles, and called those the Tenets of Tech. You will see evidence of those Tenets in the Tech Family, and you will see them displayed on posters in the Tonk and in freshman guides, and you will hear about them in freshman convocation and many other events on campus.  Each new student receives a medallion at convocation, commits to the Tenets emboldened on the medallion, deposits that medallion in the fountain of the Lady of the Mist following convocation, and then receives the medallion inscribed with the graduation date as they exit the stage at commencement.  This tradition is having an impact and that impact will be more and more evident over time. 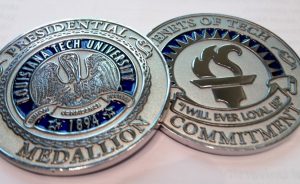 There are so many of the Tech Family who have demonstrated those Tenets in extraordinary ways.  To recognize those who have gone above and beyond in demonstrating the Tenets of Tech, my Leadership Team and I have commissioned a very limited set of tenet medallions called the Presidential Medallion.  Each medallion is being cast with a design that represents one of the Tenets.  The first medallion represents the tenet of Commitment (latin: Commendo).  It was my privilege to present the first medallion to President Reneau at the “transfer of the key” ceremony in his office last Friday at noon.  I look forward to presenting other medallions and to thanking each person for their extraordinary commitment to Louisiana Tech University.